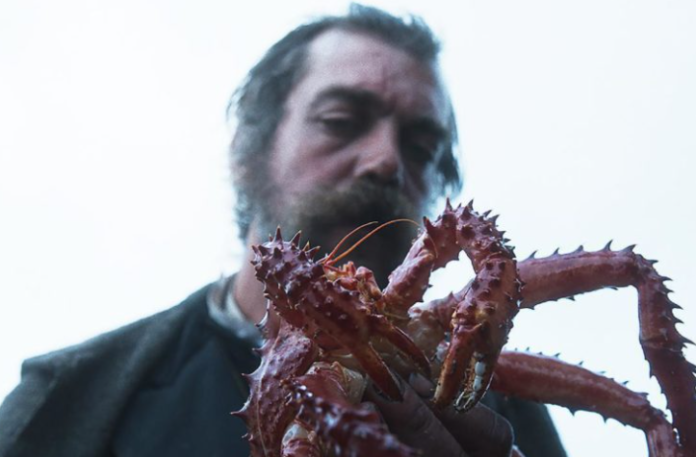 The Tale of King Crab is a vivid and thought provoking Italian film debut from documentary filmmakers Alessio Rigo de Righi and Matteo Zoppis. Their collaborative creative artistry derives from locally overheard conversations while working on another project. Alessio and Matteo combine rich cinematography of Simone D’Arcangelo, colorful characters, and a Shakespeare-esque story filled with love, tragedy, and a life changing quest for an unexpected treasure worth more than gold. The film is a fresh take inspired by traditional Italian folklore told orally via song or story. The epic songs that serve morals, purpose,  and/or entertainment are the foundation for which this film is based and can be heard as the primary soundtrack throughout the film.

Appearing to be modern Italy, a group of countryside men gather together at a local restaurant to drink, eat, and catch up. It’s unclear why they are there but it’s not long before the gentlemen break out into a song about the tale of Luciano. The next scene transitions to the late 19th century where viewers are introduced to the real Luciano for whom the tale is told of. Luciano (Gabriele Silli) is a gruff outcast who wanders throughout a rural village alone fueled by rage. He and other impoverished locals reside in a rural village that has been closed off from land that the Prince has restricted them to use. Locals have to work around these barriers and are forced further into poverty with no land to thrive, let alone survive on.

Luciano (Silli) had left that rural Italian village a strong and handsome man only to return disheveled, drunk, uncaring, temperamental, and entangled in a forbidden love that he constantly wonders if he’s ever worthy of. Luciano crosses paths with the prince of the region over the right of passage through an ancient gateway and opens the door to a betrayal that leads to devastating circumstances. The first half of this tale is sluggish with minimal dialogue and is dedicated to capturing the emotional context and visual beauty of the characters and their community. Images of lush nature, even moss covering remnants of old stone architecture are exquisite; the costumes to selected actors are well textured and extremely fitting. The lesser known but undoubtedly talented cast consists of Maria Alexandra Lungu, Severino Sperandio, Ercole Colnago, and Bruno Di Giovanni.

The second half of The Tale of King Crab picks up the pace with a more defined storyline that makes up for the slower first half. Newly exiled Luciano, whose tale has ended in Italy, ignites a new one and identity as he makes his way toward the Argentinian gold rush. Within the province of Tierra del Fuego, he is discovered by a band of ruthless pirates turned gold-diggers who are also looking for the mythical golden treasure. Avoiding what would have been a guaranteed death, Luciano (now under the guise of a priest) is able to convince these cold blooded killers that he can lead them to the riches they seek by direction of an actual crab. However, in these barren lands soaked in a gorgeous sepia color tone, greed and insanity prevail. A slow burn that is a visionary masterpiece of carefully placed CGI images, incredible landscape views, perfectly detailed costumes, cast & color tones, with a wonderfully unique twist to the tale of a man paving his way toward redemption.

The Tale of King Crab is currently playing in select theaters and expands to LA on April 29th.