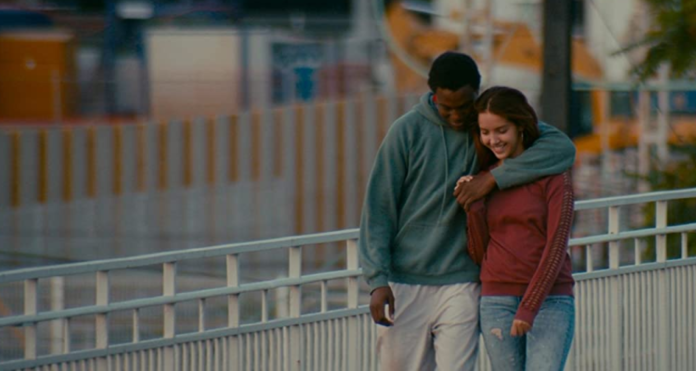 Gagarine is a French film that centers on 16-year old Youri (brilliant up and comer Alséni Bathily) as he beautifully teeters between the parallels of fantasy syfy and real world dilemmas of loss, abandonment, and the ethereal belief of ‘reaching for the stars’. Directors Fanny Liatard and Jérémy Trouilh were inspired to create a feature film based on their 2015 short that documents the real life demolition of Cité Gagarine and interviews with residents from the giant, red bricked building. Some of the residents interviewed are featured in the film as well. Cité Gagarine is a housing project located on the outskirts of Paris that was built in the early 1960’s and named after the Soviet cosmonaut dubbed ‘the first human in space’, Yuri Gagarin. The film opens with archival footage of the historic and ground breaking event of Yuri Gargin’s welcoming into France as he makes his way to Cité Gagarine’s inauguration, June 1963. Moving forward 6 decades later, the Cité Gagarine has fallen into deep disrepair. It currently houses impoverished residents yet a communal family that are faced with the threat of the building’s demolition. 16 year-old Youri (Bathily) is more than determined to do whatever it takes to keep from losing the only home he and most of his neighbors have ever known.

Youri is incredibly smart and one the most resourceful and caring residents of Cité Gagarine. He has lived on his own since his mother left with another man who’s engaged in a familial life without him. Youri’s passion for space and astrology is plainly obvious as he surrounds himself with hand crafted and up-cycled relics of the solar system, a telescope, star charts, and filled notebooks of engineering equations to better improve the building. Despite his own parental absence, Youri and his close friend, Houssam (Jamil McCraven) shine positivity and love for their home and residents by trying to keep the elevators working, installing lights, and even painting the outside to give the building a homey look. He enlists the help of 16 year-old Diana (Lyna Khoudri, The French Dispatch) who is good at hands on mechanics and has access to tools/materials Youri needs. Although Youri is mostly on his own, he does have one close adult friend and neighbor Fari (Farida Rahouadj). She is very much like a mother figure not just to him but to the whole building. Youri’s world falls into further turmoil when word gets out that Cité Gagarine will be demolished and everyone must evacuate within 60 days. Everyone he cares about is forced to leave. Youri is officially the last person left. He uses that to his advantage by embarking on a mission of resistance and transforms his and the surrounding units into his own ‘starship’ bunker.  His survival skills are incredible but the battle between preparation for Cité Gagarine’s demolition and Youri’s sense of reality vs. fantasy puts him in grave danger.

Gagarine is a Cannes Film Festival, Rendez-Vous with French Cinema and COLCOA Official Selection that is truly inspirational and eloquently expressed. A nail-biting and riveting tale of a legitimate class struggle that elaborates heartbreaking truth and the impact it has toward lower income housing and communities. Some people can move on while others have no means of physical and/or emotional support. Youri (Bathily) is an extremely talented young man who beautifully embraces and projects everything within and around him. He connects so well with all the people he encounters. I absolutely love the chemistry and bond he forms with all his co-stars; Bathily and the entire cast are an absolute pleasure to watch from beginning to end. The cinematography delicately captures grace, beauty, and lucid visual artistry that convey the emotional and fantasmic complexities of tapping into someone’s soul when they are confronted with devastating circumstances. Dali (Finnegan Oldfield) is another young resident of Cité Gagarin who leads a rowdy bunch of kids and is known for selling weed. A rambunctious shithead who will gain your respect for portraying an unsuspecting, well suited, and notable role. I love the style, the story, the blend of real life and fantasy fiction, and the entire talented cast of Gagarine. I highly recommend giving it a watch.

Gagarine plays in select theaters April 1st and will expand to more cinemas in the next few weeks.