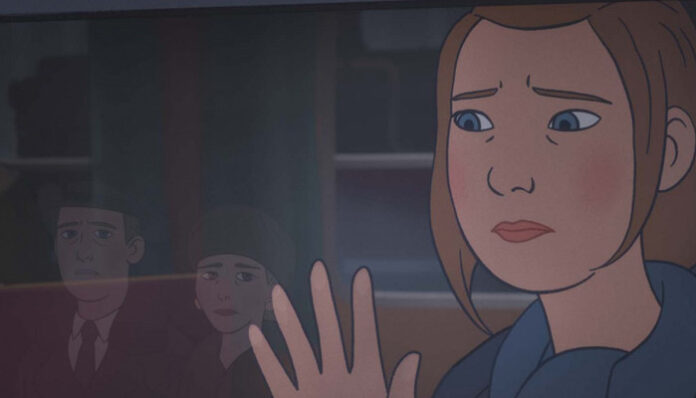 “Keep this safe, it is my whole life.”

For German-Jewish artist Charlotte Salomon, these words couldn’t have been truer. Salomon was one of many talented people whose potential would be snuffed out by the horrors of the Holocaust, but her magnus opus, Life? or Theatre?, 769 paintings that serve as a recollection of her every significant memory and is widely considered the first graphic novel, would live well beyond her 26 years of life. The heart-wrenching, moving animated biopic Charlotte is well-told but simplistic, perhaps to gear towards a younger audience. But the animation is clearly intended for mature audiences; it is realistic, at times unsparing, and emotionally resonant. The discord between the script and visuals does not fully detract from the power in Salomon’s story, which hopefully will gain increased notoriety.

Directed by Tahir Rana and Eric Warin, who are joined in their efforts by fellow Salomon fan Keira Knightley who voices Charlotte (Marion Cotillard voices the French version), the film largely focuses on the artist’s teen years and into adulthood. An aspiring artist in Berlin, Salomon is accepted into a prestigious art school but is expelled for being Jewish. As Hitler’s power grows and life for Jews becomes increasingly dangerous, Salomon is separated from her parents (Eddie Marsan, the late Helen McCrory) and sent to live with her grandparents (Jim Broadbent, Brenda Blethyn) near Nice on the Côte d’Azur grounds of wealthy American expat and friend Ottile Moore(Sophie Okonedo). But tragedy would continue to follow her wherever she would try and set up roots.

The world might have been on fire, but it didn’t stop Salomon from facing personal hardships from those she loved most. Her grandfather both resented her art while also relying on Salomon for personal care, driving a wedge between them that would end in somewhat notorious fashion. At the same time, she fought worries that she would face the same debilitating, and ultimately suicidal depression that befell many of the women in her family. The way she did this was through her painting, with Salmon capturing what few rays of sunshine she could find in a world that was unfathomably dark. Her life’s work would comprise many subjects: war, love, sex, womanhood, and of course, Hitler and the Nazi invasion.  Salomon would also find love for a time with well-known singing/drama therapy teacher Alfred Wolfsohn (Mark Strong), before later getting married to the man (Sam Claflin) she would be with until the Gestapo knocked down their door for the first and last time.

Whether one knows Charlotte Salomon’s story or not, the inevitability of her fate is tough to miss. Salmon herself expresses this when delivering her beloved paintings to a friend for safe keeping. She knows that time is short and the walls are closing in. It casts a pall over Charlotte that is tough to cut through, but it also makes her choice to live life to the fullest and wring as much out of it as possible something to be admired. The film can feel a little too episodic, jumping from one tragic hardship to the next without time to fully let them sink in. There are two scenes, both involving the deaths of loved ones, that should have been more impactful than they are, but things move along from them too quickly to get to the next thing. It could be a means of keeping the film at a slight 92 minutes, but Salomon, who has been overshadowed as a contemporary of Anne Frank for far too long, deserves a commitment to a full retelling of her story. As it is, Charlotte accomplishes the one thing I want from all such biographies. It captures Charlotte Salomon’s life with truth and respect, and will encourage others to become more acquainted with her and the work that continues to thrive.

Charlotte is open in theaters now.