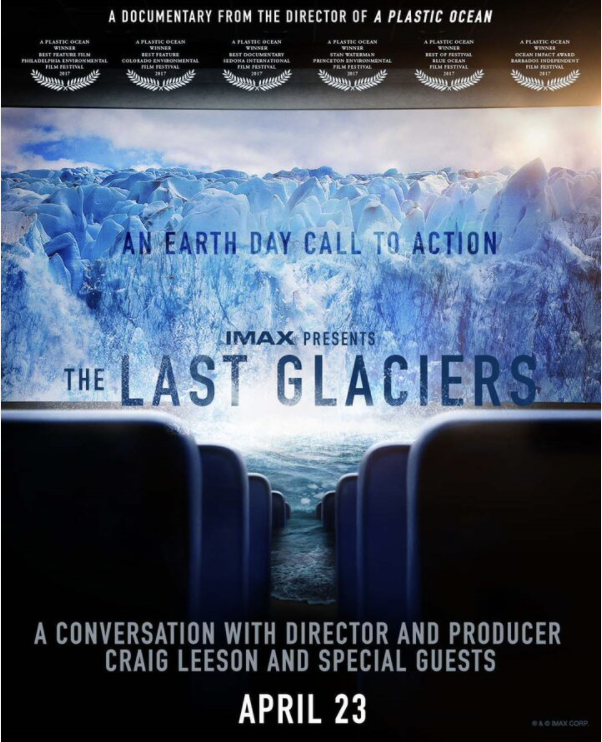 SYNOPSIS: Embark on a global IMAX adventure and push the limits of extreme sports to investigate the causes and effects of climate change. To mark Earth Day this year (April 22), IMAX will host a special screening of the climate documentary THE LAST GLACIERS followed by a live interactive Q&A with Director and Producer Craig Leeson and special guests on Saturday, April 23rd. This will be screened and broadcasted in over a dozen IMAX theaters across North America including AMC Georgetown using IMAX’s connected network.

On Global Water Day (March 22) IMAX launched the impactful documentary THE LAST GLACIERS to IMAX institution theaters across North America. From Antarctica to the Himalayas, the Alps, and the Andes, IMAX immerses you in an extraordinary journey to the top of Earth’s glaciers to show how rapidly they are disappearing. Director and Environmentalist Craig Leeson has partnered with United Nations Mountain Hero & Entrepreneur Malcolm Wood to highlight the importance of protecting our natural resources and uses para-alpinism to spectacularly film these disappearing glaciers. The 40-minute documentary captures the fragility of our natural world and brings forward a call to action from the next generation determined to reverse the climate crisis for their own future. It is a moving and immersive experience that not only examines the urgent climate crisis we find ourselves in but also underlines the important role young people play in curtailing its potential outcome. Featuring original music composed by Grammy®-nominated Above & Beyond. Experience IMAX presents THE LAST GLACIERS in select IMAX theaters listed below and learn more at www.thelastglaciers.com.

The screening takes place on Saturday, April 23rd at AMC Georgetown IMAX. Doors open at noon with film to start at 1:20pm. Arriving early is suggested as seats are first come first served! If you’d like to attend, RSVP at the Gofobo site here.

DC Readers: Attend A Free Early Screening Of ‘Doctor Strange In The Multiverse Of Madness’