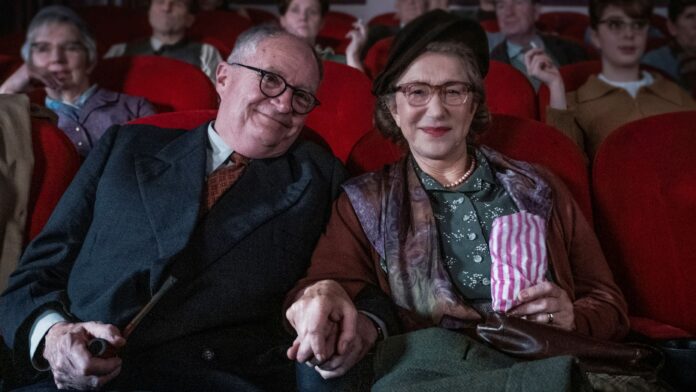 In 1962’s Dr. No, James Bond is about to have dinner with the film’s titular villain when he notices a famous stolen painting in his host’s possession. That work of art turns out to be Francisco de Goya’s Portrait of the Duke of Wellington, which was actually missing from London’s National Gallery at the time of filming.

Pathé’s The Duke attempts to fictionalize the search for the painting, told from the perspective of the family that stole it. Legendary British character Jim Broadbent plays Kempton Bunton, a self-educated & working-class 60-year-old man living in Newcastle, England. Boorish and boisterous, his passions for writing and activism annoy his fed-up wife, Dorothy (Dame Helen Mirren), a housekeeper. Their son, Jackie (Fionn Whitehead) seems to enjoy his father’s civil disobedience and inability to keep a job until it interferes with his own life.

Bunton’s latest crusade happens to be pensioners receiving free television licenses from the government, a cause that leads him to London the same weekend de Goya’s painting goes missing. A country-wide manhunt is called and soon all eyes are on the Buntons, much to Kempton’s delight and Dorothy’s dismay.

The Duke is your typical British, mid-century period piece. With two veteran actors at the helm, the ship is never steered in the wrong direction. However, with most actors sporting thick Newcastle accents and very predictable narrative beats, the film feels kitschy and oddly mundane at the same time. Richard Bean and Clive Colman’s script tries too hard to be clever, especially towards its final act.

Matthew Goode shows up halfway through The Duke as Bunton’s trial lawyer, Jeremy Hutchinson for an understated, yet entertaining performance. While the whole film is bookended by Bunton’s trial, its presence at the beginning is so brief I forgot about the courtroom entirely. This is just one of the film’s many gimmicks including heist motifs and dad jokes that purposefully don’t land.

Broadbent tries to find grace within the at-times obnoxious character, and for the most part, he succeeds. Kempton eventually grows on you as does Mirren’s prickly performance as Dorothy. As “the wife of the hero” who is written to be a bit naggy and annoying, the Dame works hard to round out the character’s edges and be more than a stereotype. Fionn Whitehead, who has had astounding performances in The Children Act and Port Authority, is underused here playing their caught-in-the-middle son.

Despite trying his hardest, director Roger Mitchell doesn’t do anything new with The Duke. The true story, a footnote on one of the most profitable film franchises in history, is destined to remain just that.

The Duke is hitting theaters and on demand on Friday, April 22. Watch the trailer below.