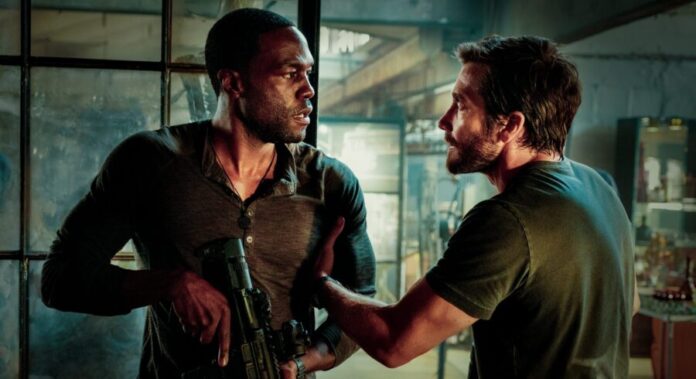 If you’ve ever seen the Danish film Ambulancen from 2005, you’ll be hard-pressed to recognize anything of it in Michael Bay’s jacked-up steroid version, Ambulance. And look, I’m not gonna sit here and complain about it. Bay’s films, when at their best, are like a shot of adrenaline shot right into the veins. His Transformers movies never really felt that way, and whatever that crap thing he did for Netflix was too stupid to be much of anything. But Ambulance is more like the Michael Bay of old and it’s a Goddamn blast.

Ambulance is shot in LA and they want you to know it. In a weird, really messed up kind of way it almost serves as a tour through the city, if by a tour you mean a 2 hour+ car chase with flipped police vehicles, big brawny dudes who talk too much and out of turn, lots of gunfire, and explosions, there are indeed explosions. But what you also get are lots of shots of the LA skyline, during the brief moments when said muscly dudes stop and take off their shades long enough to admire it. The action is excessive, pulse-pounding, and awesome in the Bay style. The camera dips and swirls every chance it gets, even when it doesn’t need to. The plot is, to put it charitably, quite stupid, but a trio of engaging performances by Jake Gyllenhaal, Yahya Abdul-Mateen II, and Eiza Gonzalez are enough that you buy into almost every bit of it.

Typical for a Bay film, the characters demand a lot of emotional investment with the bare minimum of effort. Abdul-Mateen plays Will Sharp, a military man who gave everything to his country only to be abandoned upon his return home. He’s got no job, no healthcare that’ll cover his ailing wife (Moses Ingram), and basically, Will feels that his service went to waste. That’s when Gyllenhaal comes swaggering into the picture as Will’s adoptive brother, Danny. After growing up together the two have become estranged, in no large part due to Will’s wife who wants no part of Danny in their lives. But Will needs help, and Danny offers him a chance at a big pay day by joining in on an epic bank heist worth millions. This is a basic snatch ‘n grab job. Go in, guns hot, get the cash, rollout. In only the first of many poor decisions made this fateful day, Danny agrees. The job, as easy as it sounds, goes predictably bad.  A shootout ensues, people get dead real quick, and it’s all Danny and Will can do but snatch an ambulance carrying Gonzalez’s EMT Cam Thompson and a badly injured police officer who was asking out the wrong bank teller at the wrong time. What follows is a mad blitz through the LA streets with the whole Goddamn police force giving chase.

The plot is dumb but it doesn’t have to be. It’s the script that makes it absurd with so many cheap coincidences, illogical decisions, and “cool” one-liner characters muddying things up. This is one of those films that is constantly looking for ways to outdo itself, not just in terms of the rapidly increasing speeds, or the size of the crashes, but in terms of twists and swerves to keep the audience as off-balance as if they were inside of the many tumbling police vehicles. We can sorta understand Will getting roped into this desperate gambit to save his wife, but not that Danny would recruit him literally moments before the job is to start. Military dude or not, he doesn’t know the plan at all. This is also one of those movies where the various law enforcement agencies have to needlessly squabble to the detriment of their own case. So you’ve got Garret Dillahunt’s cowboy-esque Captain Monroe butting heads with the FBI’s Anson Clark (Keir O’Donnell), who happens to have been a college friend of Danny’s and knows all of his tricks! It’s all so improbable it’ll make you roll your eyes.

That said, it’s the improbable stuff that makes Ambulance fun. When it shoots for seriousness, nothing really works. So when the most heavily-armed street gang of all-time gets involved about halfway through, we totally just want to throw our hands up and roll with it. When after about 50 cars have been smashed into oblivion Monroe says, in all seriousness, that he’s worried about rush hour traffic (It’s LA! There’s always traffic!) and how deadly the chase could get, it’s so dumb that we can only laugh. And that’s nothing compared to precision surgery being performed inside of a speeding vehicle while surgeons give instructions in-between tee times. It’s ludicrous and I loved every moment of it.

I think at this point Jake Gyllenhaal can have good chemistry with just about anybody. His Danny is the type of flippant, motormouth character that would come across as phony under the wrong hands. He’s still a touch too annoying at times, but we get that he’s the wild child of the Sharp clan, who perhaps takes too much after his criminal father than he cares to admit. Abdul-Mateen has to play the conflicted sibling, and he’s convincing enough that we don’t linger on how much of an idiot he is for getting into this in the first place. The real showstopper is Eiza Gonzalez, whose resourcefulness, toughness, and flashes of vulnerability are the emotional core inside that ambulance. She has the hardest job, by far, holding this whole thing together and I think this is a breakout role for her. Not that she needs one. Gonzalez has been great for a while now and it’s no surprise she’s the same here.

Is Ambulance one of Michael Bay’s best? No, but it’s also been a long time since we’ve had a movie that is so quintessentially him, and I’ll be honest it was a breath of fresh air. This had the feel of a summer blockbuster and I’m still surprised Universal didn’t wait to drop it during the hottest movie season of the year.