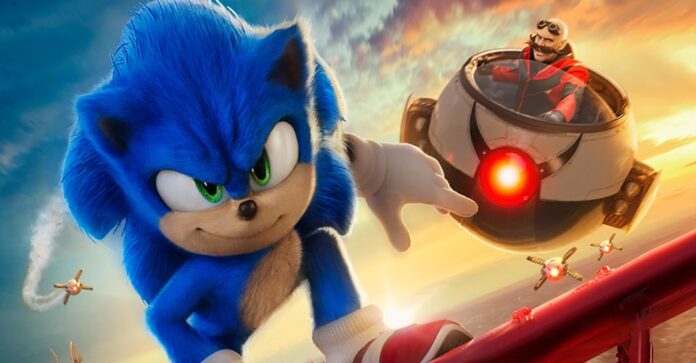 If Sonic the Hedgehog 2 is truly the big goodbye for veteran comic actor Jim Carrey, then I’m okay with that. His Dr. Robotnik/Eggman was a damn treat in the surprisingly great first Sonic movie in 2020, giving us something to laugh about right at the start of the pandemic. And now two years later, his absurd chrome-domed villain again steals the show from the speedy blue furball in a sequel that sets this franchise as the best video games have to offer.

Because staying away from Carrey’s Robotnik for too long would be criminal, the film begins with the villain’s hilarious escape from the Mushroom planet with the unexpected aid of Knuckles the Echidna (Idris Elba), a brawler with a power that surpasses Sonic’s and one Hell of a knockout punch. They return to Earth where they hope to find the all-powerful Master Emerald, but are confronted by Sonic (once again voiced by Ben Schwartz) and his newfound friend Miles “Tails” Prower (Colleen O’Shaughnessey). Along for the ride, of course, are Sonic’s human “parents”, Tom (James Marsden) and Maddie (Tika Sumpter), who are closer to him than ever, becoming more like a real family.

The plot is a bit of a mess, though. At a staggering two hours in length, there are essentially two separate stories unfolding and only one is interesting. Here’s a hint: it doesn’t have to do with Maddie’s sister Rachel (the terrific Natasha Rothwell) who is on the verge of getting married in Hawaii to Randall (Shemar Moore), a handsome devil she barely knows. The film repeatedly cuts away from the cartoonish action and humor that we love from Sonic, Knuckles, Robotnik, and Tails, to keep up with the marital shenanigans just feel lazy and tacked on. To be perfectly honest, this is the kind of storyline that happens when a sequel is rushed into so quickly, as this one was to capitalize on the first movie’s success.

It’s unfortunate because the rest is so much fun. Sonic and Tails have an easy rapport that we quickly believe in, and yes it helps if you’re a longtime fan of the video games as I am. Elba’s Knuckles is a brawling badass, with the actor’s booming voice a perfect fit. And then there’s Carrey, whose ridiculous facial expressions and twirling mustache continue to be a highlight. It’s not quite as physical a performance as in the first movie, but I would say Carrey’s Robotnik is closer to the video game version this time, especially in the highly-mechanized final battle.

Sonic the Hedgehog 2 delivers what fans of the first movie are coming to expect. Fast action, faster quips, a badass Idris Elba as Knuckles, and more of Jim Carrey’s wildly over-the-top Dr. Robotnik. I don’t want to see Carrey go, because these movies prove he’s still got a lot left to offer, and has put his stamp on the Robotnik character in such a way that replacing him will be extremely tough to do.

Sonic the Hedgehog 2 opens in theaters on April 8th.