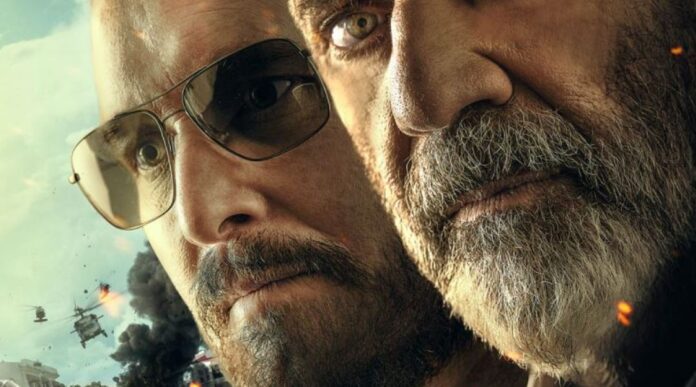 The name Mark Neveldine carries a lot of weight with action fans, as he’s remembered as one half of the Neveldine/Taylor directing duo who gave us the high-energy Crank flicks. He’s been flying solo for a while, and now he’s back behind the camera for Panama, a generic ’80s actioner than is totally lacking in the Neveldine style his fans will expect. It’s not without trying; the frantic camera and quick-cutting are still there, but the plot is matched in laziness only by the dull performances of star/producer Cole Hauser and Mel Gibson.

“Let me tell you; there’s nothing more rock ‘n roll than taking out the bad guys for the red, white, and blue.”

Gibson’s sleepy voiceover as unchained defense contractor Stark introduces us to the smug, self-aware style that would’ve been fun if Panama were a better movie. The film is set in the egotistical, greed is good period of the 1980s, so there’s lots of talk of Iran-Contra, Manuel Noriega, and many hot-button scandals of the time. Hauser, whose slow, menacing delivery makes him a better villain, plays James Becker, a tough, decorated ex-Marine recruited to go undercover and negotiate a high-value deal with some dangerous folks. And if he can get Panamanian leader Noriega hemmed up on criminal charges, as well, all the better.

After teasing the sort of high-octane movie Neveldine is known for, Panama settles into a flat routine where he encounters one lazy archetype after another: Cuban playboys, deadly kingpins, femme fatales. All boring. Becker navigates this world of political corruption and international power players with all of the enthusiasm of a throw rug. It’s a shame because Hauser is a really good actor when given material to work with, but here he just seems disinterested. The same goes for Gibson, who is veering so close to Bruce Willis territory it’s scary. If those two ever do a movie together the collective malaise could be bottled and made into an essential oil for insomniacs.

Even when there are action beats, such as a jungle shootout where Becker’s team rocks a boombox of heavy metal tunes to disrupt the enemy, the action gunplay is weak. Where is the propulsive force of Neveldine’s prior movies? It’s not like he sacrificed it for a greater attention to detail or to offer any new insights into America’s part in spreading chaos around the globe. Oddly enough, Panama is based on true events but at no point do you ever get that sense even though, logically, it should be obvious. The locales don’t feel legit, and occasional bits of archival footage, usually of Noriega, aren’t enough to fix it. It’s a shame that it turns out to be such a missed opportunity. The drug-dealing, weapons-running, backroom-dealing of Reagan era politics is a goldmine for genre, but Panama takes this loaded weapon and shoots itself in the foot.

Panama will be available in theaters and digital on March 18th.

‘Panama’ Trailer: Mel Gibson And Cole Hauser Star In CIA Action-Thriller From The Director Of ‘Crank’