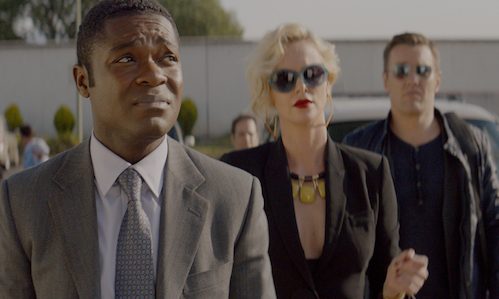 Interesting to see the trailer arrive for Nash Edgerton’s Mexico-set film Gringo arrive just a day after the one for Sicario 2: Soldado. Both look at Mexico through the lens of America’s drug war, but you’d be hard pressed to find any other similarities between the two.

The cast for this is out of this world, with David Oyelowo, Charlize Theron, Joel Edgerton, Thandie Newton, Sharlto Copley, Amanda Seyfried, and Yul Vazquez starring in the dark comedy about an American businessman who finds more trouble than he bargained for across the border.  This looks like something very different from what we normally get from Oyelowo, too.

Here’s the synopsis: Combining dark comedy with dramatic intrigue, Gringo joyrides across the border into Mexico, where all is not as it seems for mild-mannered American businessman Harold Soyinka (David Oyelowo). Crossing the line from citizen to criminal, Harold tangles with duplicitous business partners, Mexican drug lords, international mercenaries, and the DEA. As he attempts to survive in one of the most dangerous places on earth, the question lingers: is this ordinary man in way over his head, or is he two steps ahead?