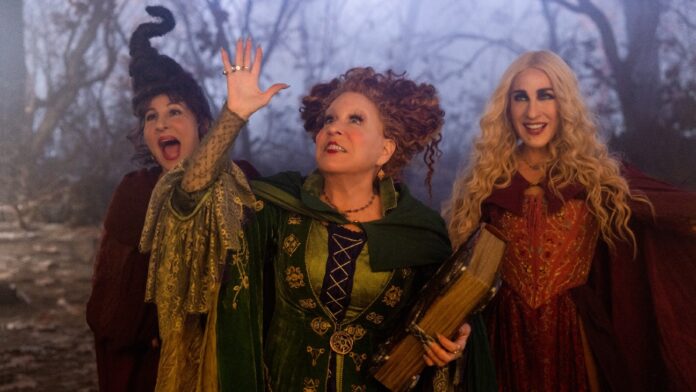 Almost 30 years ago, Bette Midler, Kathy Najimy, and Sarah Jessica Parker appeared in a corny Disney Halloween movie that bombed at the box office and was universally panned by critics. Because of the magic of television reruns, that little movie became one of the most beloved kid’s holiday films of all time. The witches of Hocus Pocus are back with Hocus Pocus 2, destined to enchant current fans all over again.

I was never a Hocus Pocus stan. I had seen it once or twice over the years in college or at a party. Being a lifelong Bette Midler superfan, I always appreciated the campiness of her buckteeth emotionally abusive witch, Winifred Sanderson, determined to keep her youth. Leader of her coven of sister witched (Parker and Najimy) I have always felt the original put the hokey in hocus pocus in a way that never fully appealed to me.

The sequel is just as corny as the original. Two Gen Z (virginal) teenage girls light the black candle on Halloween night and bring back the Sanderson Sisters, who then wreck havoc on Salem all over again. Doug Jones returns as zombie Billy Butcherson, who is not happy to be tied in history with Winifred. Sam Richardson plays a magic shopkeeper obsessed with Salem’s local legends and Tony Hale plays the mayor Traske, who comes from a long line of leaders in the town. Though the adults are stupid and the kids wise as expected , the friendship problems plaguing aspiring “witches” Becca (Whitney Peak), Cassie (Lilia Buckingham), and Izzy (Belissa Escobedo) feel unnecessary. We are clearly here to see Midler, Parker and Majimy.

The film opens with the Sanderson Sister origin story, full of angry puritan leaders, house fires, and Ted Lasso’s Hannah Waddingham as a child-eating witch who gives the girls their spell book, effectively making them witches. Taylor Paige Henderson plays a spot on younger Midler that is somehow sophisticated and fun at the same time. I could watch an entire movie just the teenage versions of the main characters. Once we move on to the modern day, the plot doesn’t really matter anymore. You’re here to watch Midler, Parker, and Najimy’s antics.  They are still so fun to watch, clearly happy to be there and they never miss a beat. For fans, none of the other details will matter. You get songs, flying Roombas, plenty of physical comedy, and wordplay.

Director Anne Fletcher does her best to nod at the original film while playing to the film’s fanbase. The plot is hard to follow and doesn’t make a lot of sense, but if you want to watch Midler, Parker, and Najimy play the Sanderson sisters as if no time has passed, Hocus Pocus 2 is a real treat.

Hocus Pocus 2 is streaming on Disney Plus Friday, September 30th. Watch the trailer below.