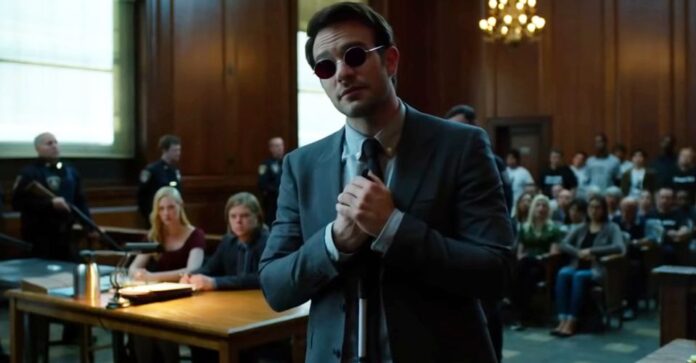 So much happens in Spider-Man: No Way Home that it’s easy to overlook one of the most stunning surprises, one that fans have been asking for a lot longer than they wanted to see Andrew Garfield and Tobey Maguire again. Charlie Coz returned as Matt Murdock aka Daredevil, and while he didn’t suit up, he demonstrated the superheroic senses that made him popular in his Netflix series. It certainly suggests that we’ll be seeing Daredevil again at some point in the MCU, and Tom Holland told THR that he hopes he’ll be part of it.

“Working with Charlie was incredibly exciting. I was a big fan of the ‘Daredevil’ series, and I think he’s a fantastic actor,” said Holland. “He’s done a wonderful job with that character, and albeit it was a small cameo, it obviously teased the future of what could be. It was a real actors’ piece, that scene.”

Holland kept going, “We blocked the scene, which was essentially us just sitting there, and we read the lines. It was great. It felt like an actors’ workshop while working with people I really look up to, and Charlie was a lot of fun. It was really cool to see him snap back into a character that I am really a fan of and that he has a lot of love for, obviously. So it was pretty awesome, and I hope that one day we find a way for Spider-Man and Daredevil to team up again.”

You could argue that Spider-Man’s best when teamed up with Daredevil in the comics. They have a banter and chemistry that lightens up both characters, which is why they’ve paired up literally dozens of times. It’s just such a natural fit. And based on the little that we saw of Holland and Cox together in No Way Home, it could work just as well on the big screen.

New ‘Daredevil’ Series Is In The Works For Disney+