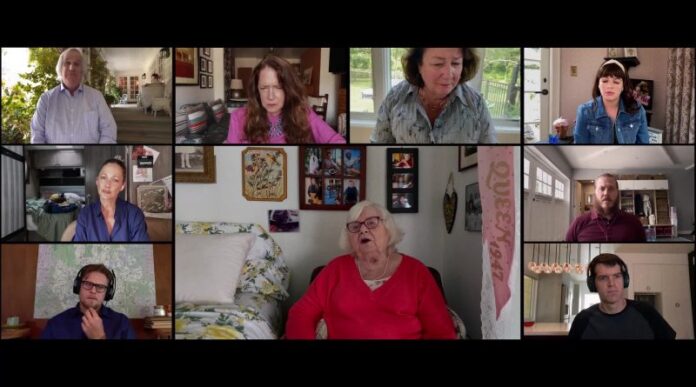 Many tried to make a film over the course of the pandemic. Some efforts have been more successful than others (see Ride the Eagle or Language Lessons). The most effective ones have been the most simple, focusing on a singular character or relationship. Stephanie Liang’s Family Squares takes the opposite approach.

Told mainly over Zoom, the story centers on a dysfunctional family forced to digitally come together for the passing of matriarch Mabel (June Squibb). Her two children Diane and Bobby (Margo Martindale and Henry Winkler) still have unspoken beef with one another that is passed down to Diane’s children. Of course, Robert (Billy Magnussen), Dorsey (Judy Greer), Chad (Scott MacArthur), Katie (Casey Wilson), and Bret (Timothy Simons) all have their own secrets and issues that come out over the family’s numerous online meetups. Rolling their eyes at the adults and rounding out the cast are Elsie Fisher and Maclaren Laing as Brett’s daughter and Dorsey’s son.

Co-writers Liang and Brad Morris’ initial premise is simple “bring an entire family together to visit their 90-year-old grandmother on her deathbed and subsequently after her death to deal with the fallout. However, with so many characters and limited production value, there is only so much a viewer can follow. Storylines are overly elaborate that little details get lost.

The audio and lighting quality fluctuate depending on the actor’s setup. Narrator Rob Reiner is given a microphone so crappy, he sounds more like Danny DeVito. Winkler and Martindale share a few phone conversations that have worse production quality than most home videos. Some scenes are meant to take place off of technology, with the actors filming those scenes socially distanced and on iPhones. While it’s understandable with COVID restrictions why those scenes were shot poorly, one wonders why any part of Family Squares takes place offline at all.

The actors’ talent does shine through the convoluted concept. Henry Winkler has some biting one-liners. Ann Dowd somehow delivers a subtle and complex performance as Mabel’s much younger wife. MacArthur, Magnussen, and Simons all have great brotherly chemistry, ribbing on each other as much as possible. Some scenes that were improvised seem to feel the most natural and let the actors really shine.

During the credits, you get a behind-the-scenes look at how the film was made. Liang asks certain actors to go into breakout rooms and everyone has their own set of technical issues. It’s a nice touch that feels very apropos of our current moment. Like the past two years, Family Squares is chaotic and at times incoherent. With the right people though, you can make something relatable and charming.

Catch Family Squares in theaters and on-demand. Watch the trailer below.