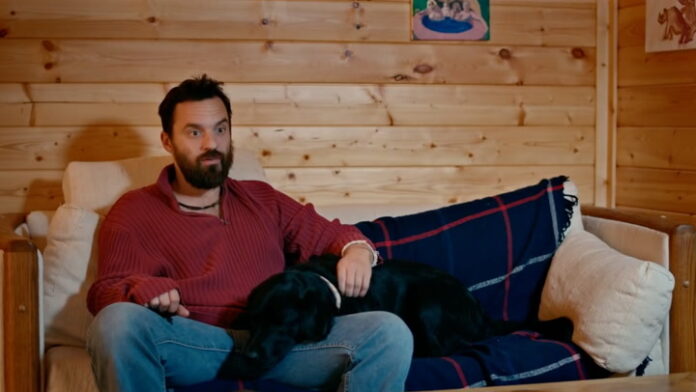 Actor Jake Johnson is probably best known for playing Nick Miller on FOX’s New Girl. Even three years after the show ended, Johnson’s loud, grumpy, and lovable curmudgeon is still getting meme’d and is still watched by millions on Netflix. His new film Ride The Eagle feels like a spiritual sequel, with Johnson back playing another lackadaisical directionless grump, this time with mommy issues and a secluded cabin.

Johnson plays Leif, a slacker and stoner living on some kind of artist commune, who has just found out his mother, Honey (Susan Sarandon), has died. With her passing, he is told he will inherit her cabin in Yosemite, as long as he finishes the video to-do list she has made for him. Despite his clear reservations and unresolved issues being abandoned by her to join a cult, Leif decides to take his black lab, hop in his van, and try to complete her last wishes.

The script was co-written by Johnson and Trent O’Donnell. The latter is known for directing pretty much at least one episode of every single popular sitcom of the last five years including Brooklyn Nine-Nine, Grace and Frankie, and The Good Place. He even directed 28 episodes of – you guessed it– New Girl, where he first met Johnson. It’s clear the best thing he learned from his time directing sitcoms was to let the script and action of the scene drive the direction. Sure, this approach to directing feels simple, but ultimately it prevents the story from feeling over the top. Ride The Eagle had the potential of presenting as an outrageous comedy with an overly sensitive, unearned emotional ending. Instead, its groundedness works in the film’s best interests.

Part of those directing decisions could be because Ride The Eagle was shot under COVID-19 restrictions. No two characters really get too close to each other and a lot of the acting is done over split-screen and through technology. Overall, the performances feel natural and seamless. Most of the film lands on Johnson’s shoulders with his scene-partners on videotape (Sarandon), over the phone (D’Arcy Carden), or on four legs (Nora the dog, in a brilliant animal performance). He brings just the right amount of spaz to Leif’s character to drive the comedic moments but not enough to cross the line.

In supporting roles, Sarandon plays the sexually free mom-type we’ve seen from her before. Because she is only seen through her ‘videotaped will,’ we get just enough of her to get a sense of her character’s effect on her son and to fulfill us for the rest of the movie. J.K. Simmons pops up as one of Honey’s former lovers and has a very similar energy to his character in last summer’s hit Palm Springs. Like the plot, their characters feel recycled but O’Donnell is smart to only use them sparingly and rely on Johnson and Carden to bring the film’s charm.

The chemistry between Johnson and Carden’s Audrey, Leif’s former girlfriend, works so well, despite being solely over the phone. Not only do they feel like real long-lost loves, but their attraction to one another is palpable despite not being in the same room. The dialogue in those scenes, as well as the actor’s delivery, is easily some of the best seen in a romantic comedy over the last three years – and that includes before the pandemic.

As more and more movies come out that were shot during COVID, we are seeing what techniques work and what doesn’t. Ride The Eagle might be one of the best films to come out of the last year because it took the restrictions it was given and found a way to cinematically work them into the shoot, to the point where you don’t even notice that the characters aren’t on screen together or over six feet apart. The result is a funny and moving 90-minutes of filmmaking that won’t be life-changing, but will leave you happy and satisfied. After the year we’ve had, that should be more than enough.

Ride The Eagle is available in theaters, on demand and for digital download. Watch the trailer below.