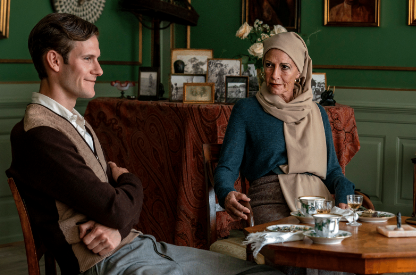 The Pact is a poetic drama film that’s based on the relationship between authors 63-year-old Nobel Prize winner Karen Blixen (Birthe Neumann) and Thorkild Bjornvig (Simon Bennebjerg). Karen Blixen is the well renowned writer of “Out of Africa” (under the pen name Isak Dinesen) who’s memoir novel reflects the 17 years she lived in British East Africa, AKA Kenya. Her book first published in 1937 and recounts her experiences of losing love and the plantation she adored as home. Having become a literary sensation in her older years, Blixen who’s unfortunately devastated by syphilis and grief, struggles with her mental and physical health. Blixen later admits in the film that her physical pain has escalated because of being prescribed mercury pills to remedy her syphilis which in turn worsened her health. Desperate and lonely, Blixen returns to her family estate in Rungstedlund, Denmark where she soon calls upon young poet Thorkild Bjornvig (Bennebjerg). Blixen believes that Thorkild could have the potential to be a phenomenal writer especially, with her help but it could be more trouble than it’s worth.

It’s 1948 and 63-year-old Out of Africa author Karen Blixen (Neumann) has invited 30-year-old poet Thorkild Bjørnvig (Bennebjerg) to stay at her family estate to mentor him. She offers to teach him everything she knows and promises stardom as long as he will obey her unconditionally. A pact that once made begins to weigh heavily and with the aid of Blixen, driving a wedge between Bjornvig and his wife Grete (Nanna Skaarup Voss). Blixen firmly believes that in order for Bjornvig to be a great writer, he must separate himself from his marriage and son and indulge in worldly adventurous while having a healthy sexual apetite. Blixen goes as far as setting Bjornvig in the path of his financial investor’s wife, Benedicte (Asta August). Blixen’s simple game of manipulation backfires when Bjornvig and Benedicte actually fall in love with each other. Blixen’s demands become more and more pernicious and it eventually takes a toll in the lives of the people she’s manipulated and hurt. Despite the desire for the career he wants, Thorkild must choose between Blixen’s promise of fame or his family.

From director Bille August (Pelle the Conqueror) comes this sterling adaptation of Bjørnvig’s bestselling memoir. The Pact is the Official Selection of the 2022 Palm Springs International Film Festival and the Official Selection of the 2021 AFI European Union Films Showcase. Bennebjerg and Neumann have incredible chemistry throughout this film. Despite the age gap between the two, they were able to bring the connection of which their characters are entangled and portray themselves beautifully and with little dialogue. She spoke with such poise and elegant conviction while Bennebjerg grew into a trustworthy and admirable man who cares deeply for his priorities. Their time together proved to be an eccentric and intense connection of two people who were looking to fulfill their desires but at the unfortunate expense of other people’s feelings and lives.

The entire cast does a remarkable job of presenting this story. The film delicately unveils true heartbreak and carries a dark beauty that embodies the overall ambiance of all their emotional dilemmas. The costumes are gorgeous and the rich cinematography invites viewers into Blixen and Bjornvig’s complex world and stunning era . The film can come across incredibly slow and not knowing more about Blixen’s past was disappointing.  It would have been nice to know more about her and how she came to be. It becomes clear, or at least from my pov, that Blixen is a fierce woman who lives vicariously through the “masks she wears”. These masks provide her the inspiration to create the characters and the stories she wants them to be in; however, she can’t seem to separate reality from fantasy or maybe, she simply just doesn’t care. Regardless, Blixen still earned her Nobel Prize for her literary work. A long hard film to watch but I still recommend it.