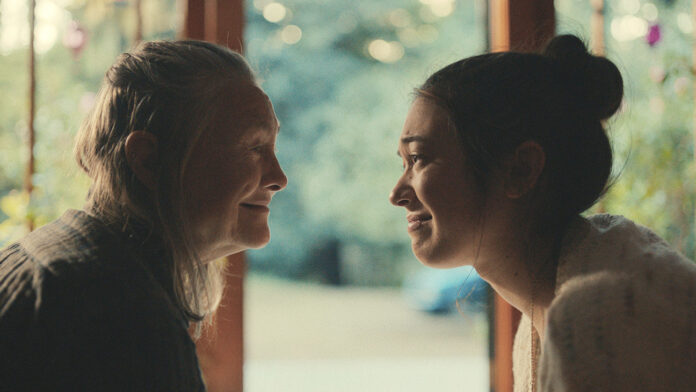 In the 2010s, nothing quite rocked the independent film world like a coming-of-age tale about an emotionally charged teenager based on an acclaimed Young Adult novel. Movies like The Perks of Being a Wallflower, The Spectacular Now, The Fault in Our Stars, and countless others resonated with young audiences not seen since the teen movie boom in the 80s.  In more recent years, darker versions (All the Bright Places, Chemical Hearts) have emerged, focusing less on the beauty of fleeting youth and more about the pain of growing up. A24 and Shirley director Josephine Decker attempts to combine both in her newest film The Sky is Everywhere.

Based on screenwriter Jandy Nelson’s 2010 novel of the same name, tragedy strikes pretty early on in the plot for our protagonist Lennie (Grace Kaufman). As a quiet clarinet player obsessed with Emily Brontë’s Wuthering Heights, we see Lennie lose her sister to an aneurysm within the film’s first few moments and kind of get sucked within her own world.

Attempting to pull her out of it is her grandmother (Cherry Jones) and Uncle Big (a severely underused Jason Segel). Full of half helpful saged wisdom and pot smoke, they are unable to keep Lennie from spiraling into the arms of her sister’s fiance, Toby, as she thinks he is the only other person in the world who understands her loss. At the same time, Lennie both loses her ability to play the clarinet and meets another boy named Joe, who eventually helps her experience music again. This push and pull between her sister and her real life, these two loves forces her to face her grief and see how it’s affecting those around her.

Full of falling furniture and vibrant gem tones, Decker’s idea of grief is more stylized whimsy than dark and disparaging realism. Lennie writes out her feelings on leaves, text messages appear in fancy fonts, listening to music with the right person feels like sex. As a director, Decker beautifully illustrates this fantasy world Lennie has created, telling the story through flora and fauna. At times, The Sky is Everywhere feels like a visual poem or a collage, rather than a full narrative feature film. It’s when Decker is forced to stay within the story’s structure, that the film stumbles.

Nelson’s script takes itself too seriously. Every word out of Kaufman’s mouth feels melodramatic. Jones and Segel aren’t given enough material to really serve their purpose as Lennie’s “guides”. With little exposition at the film’s beginning, you are immediately hit with large emotions which creates large cliches and a lack of empathy pretty quickly.

A24 has never made a “bad” movie. They’ve made plenty of mediocre ones with either interesting visuals or plot devices. It’s safe to say the studio is keeping on this trend The Sky is Everywhere. Taking big swings and hitting big clichés, Decker’s newest feature is admirable visually but has a lot of growing up to do narratively.