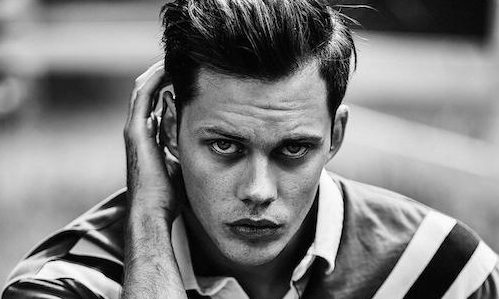 It’s funny that Bill Skarsgard has such a huge fanbase, given that he was unrecognizable in his breakout role as Pennywise the Clown. But we know first hand that he has won a lot of people over with his charm, mixed with a certain level of danger. Our video with him for Nine Days remains one of our most-watched ever, largely because of his legions of fans. And that ability to get others to let their guard down is what makes Skarsgard perfect for the lead role in Clark, a Netflix series about the real-life Swedish outlaw, Clark Olofsson.

Skarsgard plays Olofsson, the notorious Swedish criminal whose activities from the ’60s through the ’80s are the stuff of legend. He was present during the Norrmalmstorg robbery, a hostage situation that led to the creation of the phrase “Stockholm Syndrome.” Some call him the Swedish version of John Dillinger.

The series is directed Jonas Åkerlund, an impressive filmmaker known for films such as Spun, Lords of Chaos, and most recently the Mads Mikkelsen action flick Polar.

Clark will hit Netflix this spring.