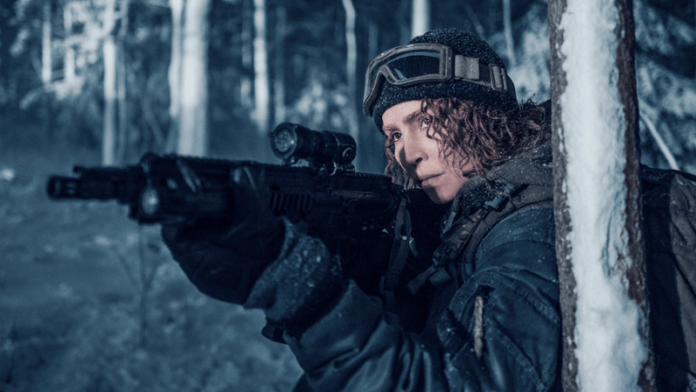 The last couple of years have seen Netflix really lean into female-led action films, catering to an audience that doesn’t always get served. And if you ask me, there are few women who kick ass in the genre better than Noomi Rapace, which makes the trailer for post-apocalyptic flick Black Crab something worth paying attention to.

The Swedish film from music video director Adam Berg stars Rapace as a woman on a dangerous mission, carrying a mysterious package across a frozen landscape in hopes of ending an apocalyptic war and find her missing daughter.

Rapace is best known for her roles in The Girl with the Dragon Tattoo, Sherlock Holmes: A Game of Shadows, and Lamb. She’ll be seen this April in Sundance horror You Won’t Be Alone.

BLACK CRAB is a Swedish action thriller set in a post-apocalyptic world torn apart by war. During a long, harsh winter, six soldiers embark on a covert mission across a frozen archipelago, risking their lives to transport a mysterious package that could end the war. As they enter hostile enemy territory, they have no idea what dangers lie ahead or who—if anyone—they can trust. But for speed skater turned soldier Caroline Edh, the mission is about something else entirely. Starring Noomi Rapace in a film directed by Adam Berg, BLACK CRAB follows six soldiers on a desperate mission to bring an end to the war which has destroyed their lives.