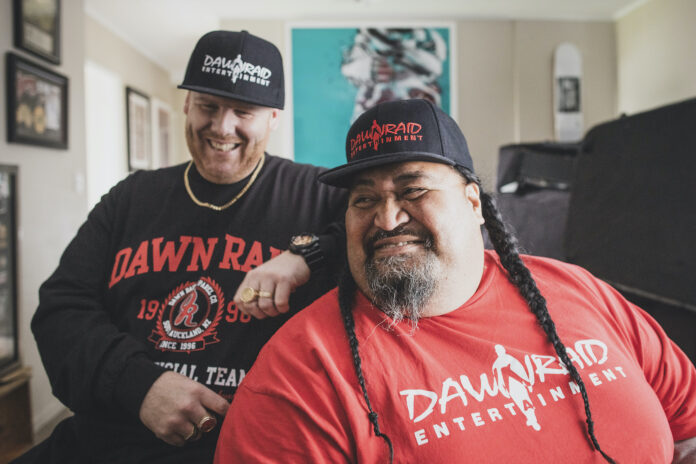 Long before New Zealand graced us with Flights from Conchords, the vocal stylings of Lorde and a horde of Hobbits, record label Dawn Raid Entertainment was carving out their own slice of Kiwi history. Started by friends turned partners Andy Murnane and Tanielu ‘Brotha D’ Leaosavai’i, who met through a local community college’s business classes, quickly grew from a South Auckland clothing line into an international force in the hip-hop world.

Now a documentary, aptly called Dawn Raid, chronicles the ups and downs of Murnane and Leasovai’i’s success in the late 90s and early 00s. Clearly masters of self-marketing and determination, they went from being unemployed and a strip club bouncer to New Zealand’s most successful hip-hop label. One of the film’s most interesting moments highlights just how much people in South Auckland (i.e. the inner city or projects by American standards) related to the music coming from the United States. From poverty to racism, Murnane, who is white, and Leasovai’i, who is Polynesian, built a business based on their ability to identify with the same themes coming out of Brooklyn and Compton.

From an American standpoint, it is fascinating to watch how our culture morphs and impacts international communities. Dawn Raid became the g- to label for American rappers who needed an opening act while touring in New Zealand. Their success was high working with performers like Akon, Beyonce, and Snoop Dogg, while their lows consisted of poor and sketchy business decisions.

Director Oscar Kightley is probably best known as a frequent collaborator of fellow Kiwi director Taika Waititi. Known for his comedic roles in The Breaker Uppers and Hunt for the Wilderpeople, Kightley takes that humor and infuses it into the film’s editing, almost with a “cause and effect” comedic timing feel. While this works on a comedic level, it lowers the stakes of the entire piece. When Murnane and Leaosavai’i talk about what went wrong with their company, the stakes haven’t been raised high enough for their plight to invoke an emotional response from the audience.

Mainly told through talking heads and archival footage, Murane and Leaosavai’i drive the documentary’s narrative. While both are charismatic, their opening interviews feel rehearsed and scripted, taking away a bit of authenticity. Interviews with Dawn Raid’s talent like Aaradna, Mareko, and Savage come off more organically. Notably, Judd Apatow, who featured Savage’s “Swing” in a pivotal scene in Knocked Up, pops up in a quick cameo.

While Dawn Raid is an interesting look at the broader intersections of New Zealand and American culture, it fails to capture the general viewer. This jewel of a documentary is probably best served for the hip hop fan, one who knew about Savage’s “Swing” before it was a Tik Tok trend.

Dawn Raid is available to rent or own on all major platforms. Watch the trailer below.