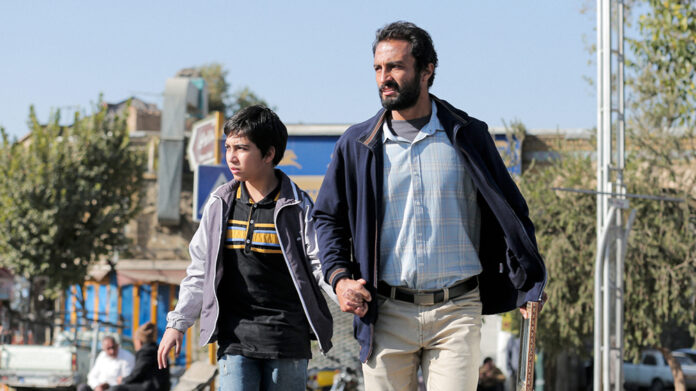 What does it mean to be a good person? Is it simply doing a good deed? Or does it go much deeper than that? If your actions aren’t purely out of the kindness of your heart, do they hold any weight whatsoever? And if you are imperfect, can you truly be innocent? Or guilty of some other offense? These are questions Asghar Farhadi, I believe the best dramatic filmmaker in the world, wrestles with in his latest masterpiece, A Hero.

A Hero is a complex look at the nature of a moral deed, and how it can be altered by factors outside of one’s control. A handbag full of gold, that most sought-after of riches, is at the heart of Farhadi’s story about good samaritan Rahim Soltani (Amir Jadidi), a debt-ridden prisoner on leave for a couple of days. Upon finding the bag, Rahim considers trading them in to help repay his debts to Braham (Mohsen Tanabandeh). Being a debtor is a greater dishonor in Iran than it is here in America, where pretty much everybody is in debt to somebody. We see how the shame of it weighs on Rahim throughout the movie. After finding the exchange rate to be too low, Rahim decides to return the bag to its owner if she can be found. After he posts the info publicly, a grateful mother shows up to claim the bag, which is willingly given up by Rahim’s sister.

This innocent good deed by Rahim turns him into something of a local celeb. The kind act helps to lighten his prison sentence, as it becomes good press for the prison and its rehabilitation efforts. A local charity, which prides itself on helping those who are less fortunate, hold up Rahim as an example to be followed. However, when the woman who claimed the bag comes under some scrutiny, Rahim himself falls under suspicion and he desperately acts to salvage his reputation.

What I love about Farhadi are the multiple layers of melodramatic elements that he piles on. His films never remain just one thing, but evolve and grow more intense literally by the minute. A Hero finds Rahim doggedly trying to save himself because a lot is riding on public perception that he is a good guy, such as whether he gets out of prison, or if he gets to marry the woman that he loves who he has been sneaking around with. But in trying to fix things, Rahim bends the truth of his motivations, ever so slightly, until something inevitably breaks. And when public perception turns against him, Rahim’s good deed looks rather villainous. Adding fuel to the fire is Braham (Mohsen Tanabandeh), the man Rahim owes; and Rahim’s young son, afflicted with a studder, who urgently needs his father to be free.

Farhadi seems most interested in exploring how the court of public opinion can change the value of a moral act. Without passing judgement on Rahim, Farhadi forces us to reexamine our thoughts of him. While he seems like a good guy throughout, even our perceptions of him shift as his flaws become more pronounced. This is helped by a performance by Jadidi that has the duality of a con-man. Rahim’s smile, so broad and earnest through most of the film, begins to take on another tone later.

Farhadi’s last film, 2018’s Everybody Knows, starred Javier Bardem and Penelope Cruz and was an unfortunate attempt to capture the U.S. audience. It didn’t really work, and lacked the ethical entanglements we’ve come to expect from the filmmaker. A Hero is a return to form by one of the best to ever make moral complexities so entertaining and so heart-racing. As Rahim pleads his case, weighing a return to incarceration and the freedom afforded by his good name, Farhadi’s point seems to be a confirmation of that old sardonic maxim, “No good deed goes unpunished.”

A Hero opens in theaters on January 7th, before streaming on Prime Video on January 21st.