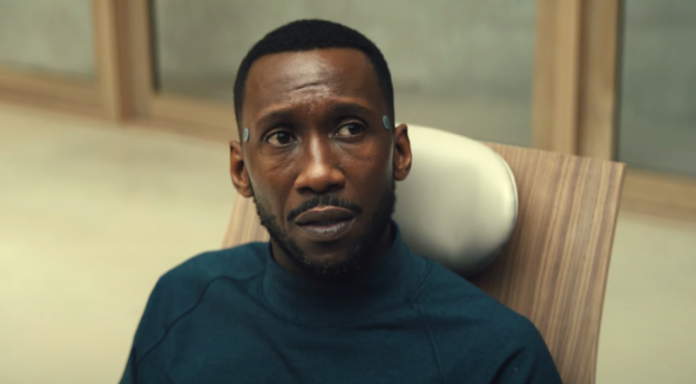 I know we’re all eager to finally get a look at Mahershala Ali as Blade, we can’t overlook how great of a dramatic, Oscar-winning actor that he is. And it’s in films such as Swan Song (not to be confused with Udo Kier’s movie from a couple of months back) where Ali gets to show that off. Here, he reunites with Moonlight co-star Naomie Harris, along with Awkwafina, Glenn Close, and Adam Beach.

Written and directed by Benjamin Cleary, who won an Oscar for his short film Stutterer back in 2016, Swan Song stars Ali as a family man diagnosed with a terminal illness, offered the opportunity to replace himself with a carbon copy clone to shield his loved ones from grief.

Tough to argue with the cast, many of whom are Academy Award winners or nominees. To the best of my knowledge this is Cleary’s first major feature, and he talked about where he came up with the idea in a previous interview with Deadline…

“This started as a premise I had 10 years ago I’d stuck in a drawer, and then five years with the script, and when Mahershala’s name came up, I was like, ‘Can we even get him to just read it?’ He did, and we sat down and it became one of those conversations you sometimes have, where each minute you feel more energized and inspired. I could see within minutes I was sitting across from someone special, who was completely tuned into the heart of the script.