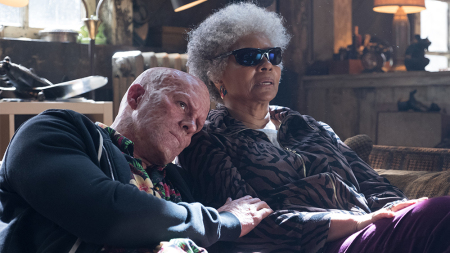 1. Deadpool 2 (review)- $125M
Deadpool 2 cut the legs out of Avengers: Infinity War, knocking it out of the top spot with a $125M debut. That falls just short of the $132M opening of its record-breaking predecessor in 2016, but ahead of the $123M of It as far as R-rated movies go.  If you look at it as just a straight up comedy sequel it’s the largest debut ever. While other studios might have been concerned about the proximity to Infinity War, Fox was smart to use Marvel’s smash hit to their own benefit. Having Josh Brolin as the antagonist in both movies gave them perfect material for some hilarious promos, and of course star Ryan Reynolds mocked Marvel as much as possible, to which they happily returned the favor. It all works out for both Fox and Marvel in the end, especially if they wind up under the same Disney umbrella at some point.
2. Avengers: Infinity War– $28.6M/$595M
Marvel’s Infinity War hasn’t been out a month yet, but it’s on the verge of surpassing $600M domestic, which is incredible. It currently sits at $1.813B which is fourth on the all-time list.
3. Book Club (review)- $12.5M
In the counter-programming department, the older-skewing comedy Book Club opened with $12.5M. That’s not bad for the film which features Diane Keaton, Candice Bergen, Jane Fonda, and Mary Steenburgen as women who find new passion in their lives after reading 50 Shades of Grey.  I can see this sticking around and playing similar to The Best Exotic Marigold Hotel, which appealed to a demo that tends to trickle into theaters over the course of weeks. They probably avoided theaters on Deadpool 2 weekend specifically, and may do the same next week for Solo.
4. Life of the Party– $7.7M/$31M
5. Breaking In– $6.4M/$28.7M
6. Show Dogs– $6M
For the kiddies there was (no, not Deadpool 2 you sickos) Show Dogs, the talking dog comedy led by the voice of Will Arnett. The film opened in the doghouse with just $6M and it’s doubtful any amount of begging will change that for next week.
7. Overboard– $4.7M/$36.9M
8. A Quiet Place– $4M/$176.1M
9. Rampage– $1.5M/$92.4M
10. RBG– $1.2M/$3.8M