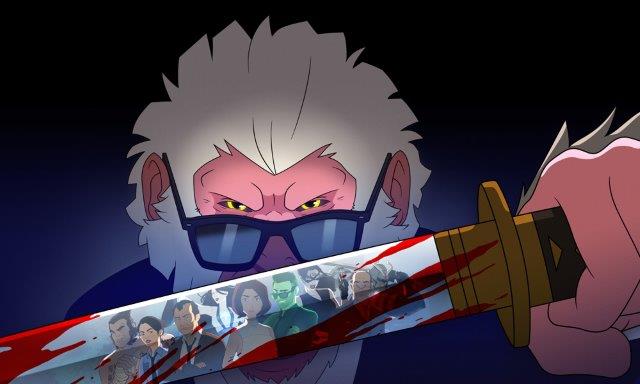 Once upon a time, Marvel Television (which yes, is different from Marvel Studios which makes the movies) attempted to replicate the shared universe success from the MCU movies by having a series of animated shows based on various obscure Marvel characters. Such characters like Tigra & Dazzler, Howard The Duck, M.O.D.O.K., and Hit-Monkey were to have their own adult-themed animated shows that would then all team up in a crossover called “The Offenders.” Unfortunately, when Disney opted to have Marvel Studios dip their toes into television to tell MCU stories via Disney Plus, many of these shows were put on pause. Hulu did keep a few shows going. Recently there was the M.O.D.O.K. TV show that had the maniacal supervillain going through a divorce with plenty of tongue-in-cheek references. The next (and seemingly only other animated show Hulu will produce for Marvel) is Hit-Monkey.

Originally an obscure Deadpool character in the comics, Hit-Monkey is exactly what it sounds like. It’s about a snow monkey that turns into a ruthless assassin, and all sorts of mayhem ensue. But after all, Marvel made us fall in love with a talking tree and raccoon, why not love a gun-toting, sword-slicing primate in a suit and sunglasses? The plot is bananas (pardon the monkey pun).

We are first introduced to Bryce (Jason Sudeikis), a wise-cracking freelance assassin who is very good at his job. Bryce is hired by people within the Japanese government to take out a political rival who wants to upset the natural order of things (i.e., get rid of corruption). After he handles his business (very ruthlessly and effectively), he’s betrayed by those who hired him. Forced to go on the run after catching a bullet, Bryce finds himself in the wilderness and clinging for his life. Luckily for him, there’s a tribe of snow monkeys that find him and nurse him back to health. While most of the monkeys are not fans of helping him (yes, we get to see a lot of monkey talk subtitles in Hit-Monkey), except one monkey (Fred Tatasciore) named in the series as “Monkey,” that’s very interested in his guns and watching him practice fighting on snowmen. Not so luckily for him (and the monkey tribe as a result), the conspirators send a kill squad after him in his snowy hideout. In the aftermath of a slaughter, Monkey picks up Bryce’s guns and somehow makes light work of the assassins.

Then it gets weird.

Somehow Bryce is “mostly dead” and now exists as a ghost that has to hang with the monkey. In fact, if he tries to fly too far away from the macaque, he’s pulled right back to Monkey’s local area. The two have somehow become tethered to each other. Now Monkey is without a home, and Bryce is wronged by people who set him up, the duo teams up to go for an adventure to solve a political conspiracy to figure out who is responsible in the Japanese underground, and kill them all. In addition to dealing with regular run-of-the-mill Yakuza guys, but also various other obscure Marvel characters like Fat Cobra, Lady Bullseye, Yuki, Ogun, and Silver Samurai. Because Hit-Monkey takes place in Japan, this gives us a chance to discover even more diverse Marvel characters that are outside the usual lexicon.

While this is a tale of revenge and mayhem, it’s also dealing with local politics. Shinji Yokohama (George Takei) was the previous political candidate’s advisor opts to run in his friend’s memory and his niece Akiko (Olivia Munn) becomes his campaign manager. They are also trying to figure out the conspiracy as to who killed their friend and their story gets intertwined with the monkey and Bryce’s revenge quest. Both Takei and Munn are good in Hit-Monkey as at first they seem inconsequential, but as the story continues, they become the main drivers of the story and how deeply it grows. By the end of the first season, those two characters are in drastically different places from where they first started, and it might not be for the best.

As much fun as Munn and Takei are, the big stars of Hit-Monkey are Jason Sudeikis as Bryce and Fred Tatasciore as Monkey. Sudeikis does most of the leg work as he’s actually the only one doing the actual talking. He’s funny and with plenty of zingers, but it feels weird hearing Ted Lasso cursing up a storm and advising a monkey to commit wide-spread murder. That doesn’t mean that Tatasciore isn’t putting in work either. While he’s doing grunts and screeches, he still inflects a wide range of emotion and you can absolutely tell how Monkey is feeling in any given situation. Another unsung hero in Hit-Monkey is the animation. While M.O.D.O.K. opted to use the stop-motion animation that made Robot Chicken so popular, Hit-Monkey goes for a more traditional animation approach, almost bordering on anime styles. Because this is such a violent show full of massive John Wick-styled gun battles, sword decapitations, and a great version of Bullseye on the small screen (using shards of glass as throwing stars), the animation is beautifully bloody.

Because Hit-Monkey is an adaptation of his origin comic from 2010 and by the end of the season is wrapped up in a neat little bow, the show feels like it’s a “one and done” season. The character doesn’t have much source material to go off of from the comics beyond what is displayed in the first season. This could hinder a second season, or perhaps it gives series creator Will Speck and Josh Gordon a clean slate to work with should Hulu renew it for a second season