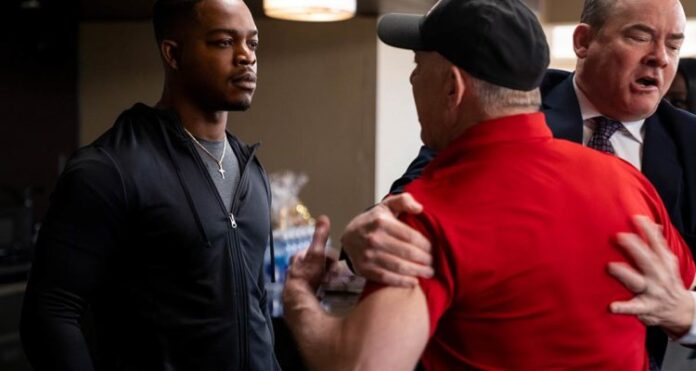 With NCAA championship sports raking in billions of dollars every single year, the debate has been raging whether college athletes should be compensated monetarily. When you consider that maybe 1% of them will make it to the pros, is it fair that these athletes give up so much of their bodies to make others rich while they get nothing but an education? The new film National Champions takes on this hotly-debated topic head-on with an extremely talented cast in front of the camera, and a director in Ric Roman Waugh who is on something of a roll.

Starring Stephan James, Alexander Ludwig, JK Simmons, Lil Rel Howery, Tim Blake Nelson, Timothy Olyphant, Andrew Bachelor, Jeffrey Donovan, David Koechner, Kristin Chenoweth, Uzo Aduba, and Andrew Bachelor (ugh, sorry I think he’s awful in everything), the film centers on two college football stars who decide to boycott the championship game until all student athletes are paid fairly. With so much money on the line, a bunch of power players must race to get this situation resolved in time for the big game.

I feel like Ric Roman Waugh has quietly been an underrated filmmaker for years. He’s coming of the surprisingly good disaster film Greenland, preceded by Angel Has Fallen, the best chapter of that franchise by far.

National Champions opens December 10th, and I’ve got my eye on this one. Looks great.

‘Half Baked’ Sequel On The Way, No Dave Chappelle But Rachel True Is Back As Mary Jane

‘R.I.P.D. 2: Rise Of The Damned’ Trailer: Jeffrey Donovan Stars As A Reborn Gunslinger In Prequel To 2013’s Flop