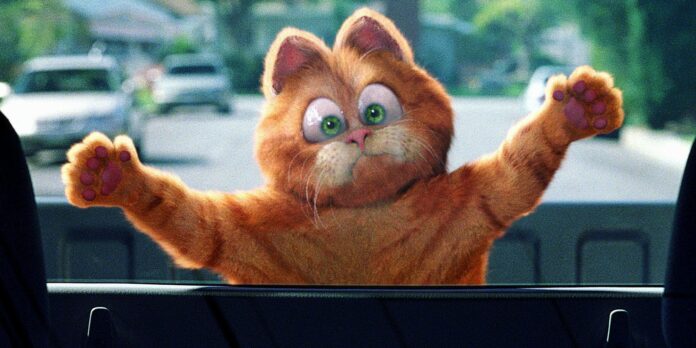 When I think of Garfield, Jim Davis’ beloved, lazy, lasagna-eating orange cat of comic strip fame, I don’t imagine his voice sounding like Chris Pratt. And yet, the Guardians of the Galaxy star will turn feline in an upcoming animated movie from Paramount Pictures.

First announced more than five years ago, the Garfield movie will have Pratt adding to his extensive list of voice credits. Everyone loved his work as Emmett in The Lego Movie, but also as Barley in Pixar’s Onward, and soon he’ll voice Mario in a Super Mario Bros. movie for Nintendo. I feel like I’m missing one.

Garfield will be directed by Mark Dindal (Chicken Little) from a script by David Reynolds, who previously co-wrote Finding Nemo.  Dindal and Reynolds previously worked together on The Emperor’s New Groove.

I think it’s safe to say Garfield is the most successful comic strip ever. First appearing in 1978, the strip would run in thousands of newspapers and reach hundreds of millions of readers. It continues to be synidated widely this very day. Not only that, but Garfield launched two long-running TV shows and a pair of live-action/animated movies in which Bill Murray voiced the famous feline. Combined they made $343M worldwide and led to multiple straight-to-DVD films and video games. He’s even a float in just about every major parade in the country.

Details on the film are unknown, but we can bet the fat, cynical cat will be making life miserable for his owner, Jon Arbuckle, and tongue-wagging idiot dog Odie. [Deadline]