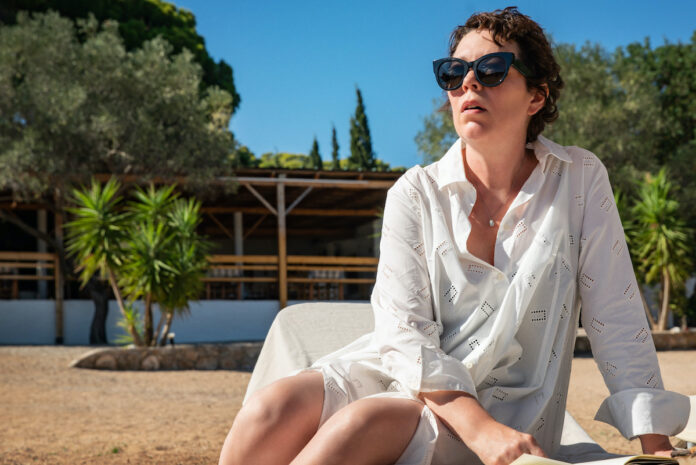 It may be her writing and directorial debut, but The Lost Daughter feels like a Maggie Gyllenhaal film.  With nearly 30 years in front of the camera, Gyllenhaal has finally made the jump behind it. This adaptation of Italian author Elena Ferrante’s book of the same name, takes the same free thinking-complicated depiction of womanhood we’ve come to know from the actress and throws it on-screen with cool flair.

Oscar winner Olivia Colman plays college professor Leda Caruso, traveling on a working holiday to Greece for the summer. Socially awkward, she tries and fails to interact with the locals, including her rental’s caretaker Lyle (Ed Harris). While at the beach, she becomes fascinated with Nina (Dakota Johnson), a young mother to a precocious and eventually demanding young girl. Through watching her, Leda starts to unravel her own past as a young wife struggling with motherhood.

The Lost Daughter seamlessly jumps between Leda’s current and past life, as we watch Jessie Buckley play the younger Colman. Her interactions with her young daughters are unnerving and complex, taking care of their basic needs but neglecting their emotional ones. Things come to a head in the main story when Nina’s daughter goes missing, leaving the entire beach in disarray. Leda is the one who finds her play with her doll in the treeline. She returns the girl. She keeps the doll.

It pays to watch this divisive film with an audience. As a director, Gyllenhaal takes off the rose-colored glasses typically used to portray motherhood. The young actresses playing the various daughters in the film are unflinching, their cries amplified for your discomfort. We see both Ledas and Nina through unconventional intimate closeups at their most vulnerable mothering moments. By literally zeroing in on the women as people, there’s no chance of losing empathy for them even in their any dislikeable moments.

In another powerhouse performance, Colman infuses a likability within the prickly and at times confounding older Leda. At one point, she says she “was an unnatural mother” as if this something we haven’t seen her younger version grappling with the entire film. With big sunglasses, short hair, and flowy shirt, Colman visually resembles Gyllenhaal. One could wonder if this move was intentional, as if the director was saying that “I too have felt like an unnatural mother and that itself is natural.”

Gyllenhaal leaves a lot left unsaid in The Lost Daughter. Nina’s home life, her affair, Leda falling in love with her husband – all could be their own films themselves. While some of what Gyllenhaal is saying is unclear, it feels purposeful. For a first time director, that’s all you can ask for.

The Lost Daughter hits select theaters December 17. It is available on Netflix December 31. A trailer has not been released.