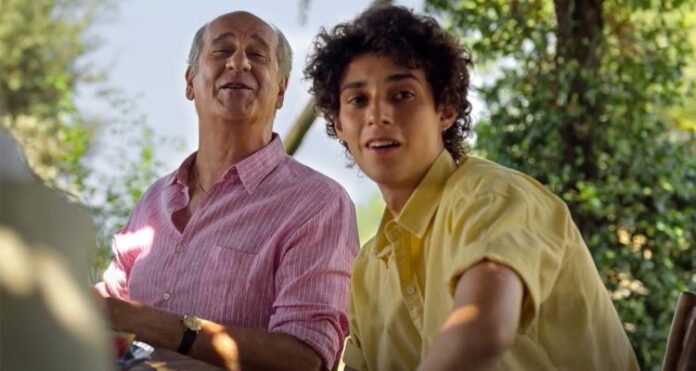 In Paolo Sorrentino’s The Hand of God, the indulgent filmmaker behind indulgent masterpieces Il Divo, The Great Beauty, and more, grief stricken teen Fabietto Schisa (Filippo Scotti) laments “I don’t like reality anymore. Reality is lousy.”  It wasn’t always that way. He lived a sort of fantasy with two happy parents (Sorrentino faves Toni Servillo and Teresa Saponangelo), a family practically ripped out of a sitcom, and an idol in superstar footballer Diego Maradona. And then tragedy struck, and the young aspiring filmmaker must make a decision: to embrace despair or indulge in the fantasy that is his chosen profession?

Sorrentino’s films often deal in extremes: life and death, reality and fantasy, the chaste vs the hedonistic. A semi-autobiographical work of striking sincerity, The Hand of God finds Sorrentino pulling back the reins of his maximalist style…but only so far. His penchant for striking, surreal visuals remains intact as well as his ever-present horniness, as one might expect from a movie seen through a virgin teen boy’s perspective. The first, more enjoyable half is perhaps the funniest Sorrentino has ever graced the screen with, as Fabietto enjoys life with his colorful kin; a prankster mom, a Communist father who turns the entire family against the aging, voice box-using boyfriend of an ugly sister; an uncle who would rather die than have Maradona play for anyone but their beloved S.S.C. Napoli. And then there’s poor, tragic, and favored aunt Patrizia (Luisa Ranieri), a buxom and mentally-ill beauty that all of the men lust for. If anyone is destined to become the muse of Sorrentino’s future works, it’s her. Like everyone in the family, she’s a force of nature and a tremendous source of humor as she flaunts her assets to men who can never have her.

As one might expect, the great auteur Federico Fellini’s presence is as inescapable as ever, both in the depiction of women as objects of sexual desire, but also in Sorrentino’s use of religious and mythological symbols. But it’s Sorrentino’s mentor, Antonio Capuano, who has an even greater impact in the depressing, rambling final act as Fabietto grapples with his future. Befriending the filmmaker but lamenting the lack of stories he has to tell having grown up in Naples, Fabietto earns the director’s harsh rebuke.

“I want an imaginary life, just like the one I had before”, Fabietto says.

The Hand of God is Sorrentino’s way of bringing the entirety of his career into focus. As uneven as this is, it’s the personification of everything Sorrentino has ever loved, hated, cared for, stood up for. These themes,  layered and complicated as they are, come together to form a dazzling portrait of a filmmaker who is still making the imaginary something real for the rest of us, and doing it at the height of his powers.