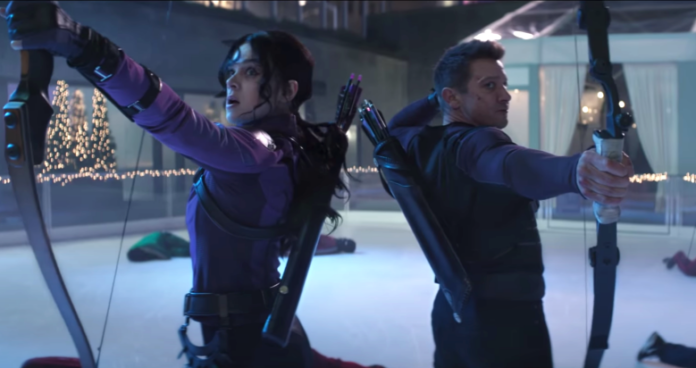 “Some people call me the greatest archer in the world.”

“Are you one of those people?”

Oh yeah, this is going to be a lot of fun. Can you believe we’re already at the fifth Marvel series on Disney+? They’re crankin’ ’em out fast, and so far they’ve hit a home run with each one, and now Hawkeye arrives this holiday season looking like it will also be right on target.

Jeremy Renner is back as Clint Barton, possibly for the last time (?), as he passes the mantle of Hawkeye over to Kate Bishop, played by Hailee Steinfeld. The story is actually set during the holidays which is a nice touch, especially with Clint repeatedly promising his family he’ll be back in time for Christmas, so he can hang out with them and Lucky the Pizza Dog who is now officially part of the MCU! There’s a real Planes, Trains, and Automobiles feel to the back-and-forth humor here, which is a welcome treat, and there’s an undeniable sense that Die Hard influenced this thing big time.

But there’s also a lot of ass-kicking that needs to go on as Clint trains the junior leaguer to be a real hero, not just a vigilante as he was during his Ronin days.  It does indeed look like the notorious (if you’re a fan of writer Matt Fraction) Track Suit Mafia will be the villains here. Not exactly Thanos, but they can be a headache.

We also see Vera Farmiga who plays Kate’s mother, Alaqua Cox as Maya Lopez/Echo, and others will turn up such as Fra Fee as Kazi, Tony Dalton as Clint’s mentor Jack Duquesne/Swordsman, plus Brian d’Arcy James and Florence Pugh who returns as Yelena Belova. As we know from Black Widow, she’s got Clint dead in her sights.