Small Engine Repair transitions from an award-winning play to film screen that’s written, directed, and stars American playwright, screenwriter, and actor, John Pollono (Mob City). Frankie Romanowski (Pollono) is a single dad who’s been recently released from prison and tries adjusting to lifestyle of changes for the better. Crystal (Ciara Bravo, Cherry, Wayne) is Frankie’s 17 years old daughter and has ambitions to go to college. Frankie quits drinking/smoking to keep a clear head and more so, his temper under control. He reconnects with his lifelong friends but more like brothers, Swaino (Jon Bernthal, The Walking Dead, The Punisher) and Packie (Shea Wigham, Boardwalk Empire, Perry Mason). All seems well until Frankie’s ex and Crystal’s mother, Karen (Jordana Spiro, Ozark, Fear Street Parts 1,2,3) pops back into their lives. It doesn’t take long for Frankie and his friends to cross paths with trouble that puts all their relationships in turmoil and risk. 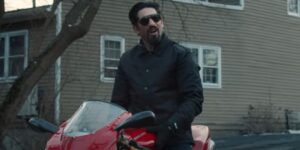 There is definitely a playwright feel to the film. The first half introduces Frankie’s (Pollono) friends, daughter, and ex. They are a tight knit group, practically a family, despite all the toxic flaws entangled within each other. They share a connected bond of growing up in a small town and struggling class of Manchester, New Hampshire aka “Manch Vegas”, fueled by their deep rooted friendship, rowdy bars and drugs, and family. When they are together and it’s good, they’re fucking hilarious. When shit goes sideways, moments turn intense and bad real quick. The Irish-Italian lower class, East Coast vibe and mentality is all too familiar for me. I totally get it. In between the good and the bad, is the constant wonder of which way the mood is going to go. Great chemistry, great acting, and well written.

The second half gets twisty when Crystal’s (Bravo) family are faced with an issue that deeply affects them all. Frankie and his friends, despite trying not to, fall back into typical rowdy drama at a local bar. They stop speaking to each other as a result. Crystal’s mother, Karen (Spiro) has her own toxic issues that drives the wedge between them all further apart. That all changes when Frankie invites his pals to grilled steaks, a whiskey-fueled, and “bury the hatchet” fun-filled  evening. Their evening takes a wild turn when Frankie also invites college student Chad (Spencer House, Teenage Bounty Hunter, Space Force) to their boys’ night to buy Molly. Events spin out of control as the truth of their evening rendezvous is revealed and Frankie begs his friends for a favor for someone they all adore and love.

Small Engine Repair is a pitch-black comedic drama with a wicked twist and a powerful exploration of brotherhood, class struggle, testing love & loyalty, and toxic masculinity. One minute you’re laughing hysterically and the next, completely terrified. There’s obvious predictability as each piece of the puzzle can be identified and provide enough of a picture to know where the story is headed. However, I absolutely love the quick wit and dark humor, well played characters, and a unique blend of color flashbacks to give more dimension and understanding to the history and evolution of the who’s and why. A revenge, dark dramedy that touches close to home for me personally, a serious message/warning to parents with teenage children, and is certainly worth a watch.