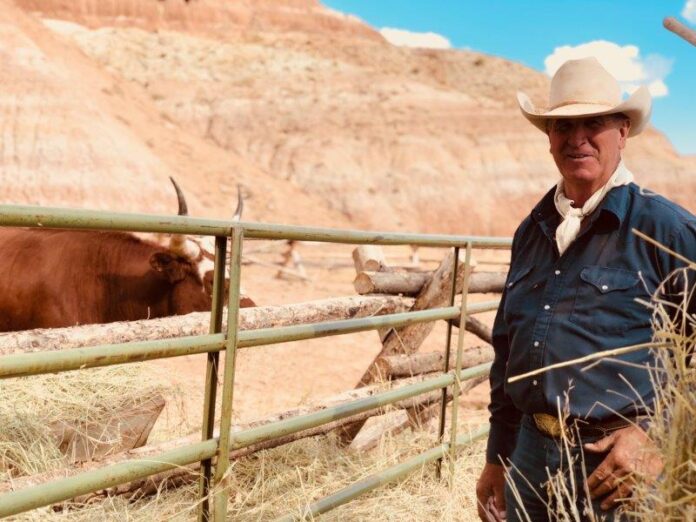 Nowadays we often hear stories about people in the movie business who got involved based on the first time they saw Star Wars, Star Trek, or countless other genre films. After all, those types of movies spoke to us on a deep level and made us realize just how fantastical the movies could be. But before there were so many niche-driven films, Hollywood was all about the Westerns. For a bulk of the last century, Westerns were one of the most dominant forms of pop culture, until all of a sudden they weren’t. The advent of special effects opened the doors for new types of storytelling in films. That doesn’t mean that the Westerns of the past didn’t have an impact on people of previous generations. My Heroes Were Cowboys is an example of one man’s love of Westerns (and horses) helped shaped his life to do what he loved doing.

Robin Wilshire immigrated to the United States at a very young age. Not really a sociable kid, he found solace in Westerns and tales of cowboys growing up. As he immediately fell in love with the rugged individualism presented in those films, he decided at a very young age that he wanted to be a horse trainer. At the time, it’s not like there are many horse training schools in America or in Australia, so he took it upon himself to learn to love and train these wild animals. As he got good at doing it, he set up The Turtle Ranch in Wyoming where he lives with his wife and son.

His first big break was the infamous Superbowl Budweiser commercial, but since then his trained horses have been in Chevrolet, Blue Cross Blue Shield, Coors, and Jeep commercials. The horse stunt work from Django Unchained and Taking Chance was done by his horses. So in all, he’s living his dream of being a horse trainer and making his mark on entertainment.

While My Heroes Were Cowboys is about Robin, it’s really not about him the person, but more a visual illustration of his passion for these wild animals. It’s about the bond that he has with each of his horses, many of which come from difficult situations, and he ends up not treating them as stunt animals or even pets, but instead as family. While he gives them all the love and care in the world, he also gets to teach them a trick or two.

As a documentary, My Heroes Were Cowboys unfortunately is too short. At a short 22 minutes, the documentary is over just as you are fully engaged in the material and have fully gotten to know him. While it’s billed as a documentary short, you kind of want to see a feature-length version about Robin, his upbringing, and how he does what he does. My Heroes Were Cowboys works to illustrate Robin’s pathos towards the Old West and the cowboy lifestyle, as well and the majestic creatures involved in those films. Speaking of the horses, director Tyler Greco and cinematographer Joe Victorine beautifully display just how beautiful horses can be as well as how breathtaking Robin’s ranch in Wyoming truly is. As many parts of America are huge cities, you can forget just how vast and beautiful many parts of America can be.

As stated, because it’s not a huge time commitment, My Heroes Were Cowboys is worth a view. If anything, you get to learn a little bit about an industry not many people are aware of, but also get to see how one man’s passion for a bygone time can be fulfilling as well as help keep that era alive.

My Heroes Were Cowboys is streaming on Netflix