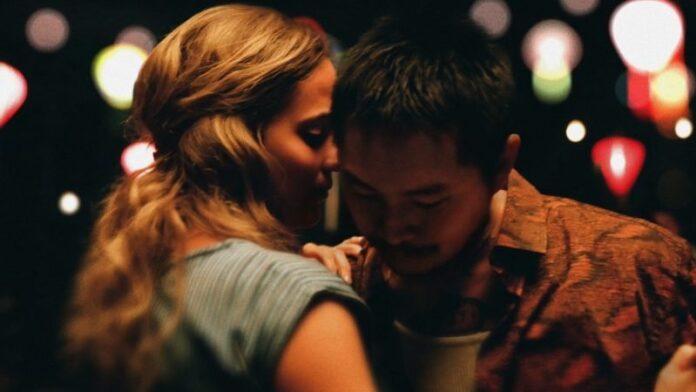 “I chose you”, Antonio LeBlanc (writer/director/star Justin Chon) tells his stepdaughter Jessie (Sydney Kowalske) in Chon’s third feature, his most dramatic and confident work yet, Blue Bayou. Those words mean a lot to Antonio, even if Jessie is too young to understand why. Born in Korea but brought into America at only three-years-old, he was abandoned by his birth mother and bounced around the adoption system before landing with a white family that abused him. Eventually, Antonio, who bristles at having to explain his French-sounding name to strangers, set out to build a hard-scrabble life of his own with loyal, perhaps too-merciful wife Kathy (Alicia Vikander).

Chon doesn’t take it easy on his characters, and definitely not the audience. Blue Bayou hits you hard with the difficulties faced by Antonio and Kathy. Money is tough to come by, and he’s not making any at his tattoo gig. When the film opens he’s practically begging the owner of a motorcycle shop for a job, and with another baby on the way their situation is growing desperate. Add to the burden Kathy’s ex, Ace (Mark O’Brien), who aggressively asserts his rights to visit Jessie. His slimy, and clearly racist, partner (Emory Cohen) has no qualms about abusing his authority, threatening Antonio at every turn.

In his third feature, Chon once again explores a little-seen aspect of the Asian-American experience, this time framed against our country’s immigration policies and, specifically, a loophole that sees immigrants who’ve been here for decades deported to countries they’ve never known. A brawl with Ace gets Antonio thrown in prison, and then into ICE custody because of one of those loopholes. Under threat of deportation to Korea, Antonio begins to lose his way and revert back to old habits.

Blue Bayou tackles a hot-button, particularly thorny issue without subtlety or easy answers. Under lesser hands, Antonio might have been made out to be the perfect citizen, to show the unjustness of an immigration policy that would kick him out for a mistake not of his making. But Antonio is deeply flawed. While a good person who obviously loves Kathy and cares for Jessie as if she were his own, he has a criminal record and falls back into it at the worst possible time. Some of his issues can be traced to confusion about his own identity and heritage. An unlikely friendship with Parker (Linh Dan Pham), a Vietnamese woman with her own tragic migrant story, forces Antonio to confront feelings he had been able to bury under the life he’d built with Kathy and Jessie.

This is daunting stuff, but Chon delivers so many beautiful moments both in front of and behind the camera. He’s such a naturalistic actor that you instantly feel a deep-rooted connection to Antonio. Chon is much better now than he was in his Twilight breakout, or even his 2017 Sundance hit, Gook, the film that put him on the map as a director. He more than holds his own opposite Vikander, who has a truly heart-swelling musical number performing the song “Blue Bayou” (made famous by Linda Ronstadt) among Parker’s Vietnamese family and friends.

For much of Blue Bayou, Chon keeps the politically-charged topic of immigration grounded to its personal impact on Antonio and his family. It’s only later in the film that his focus starts to wander. While you expect a certain amount of melodrama and oversentimentality in a story like this, dreamlike fantasy sequences involving Antonio’s memories of his mother disrupt the hard-hitting nature of the story. In the final moments, Chon tries too hard at tugging at the heartstrings in hopes of sending an impactful message. But the point had been made long ago in a way that felt organic and real. Still, Blue Bayou is an emotional powerhouse and Chon’s best, most complete film to date. The sky is the limit for him and I can’t wait to see what he does next.