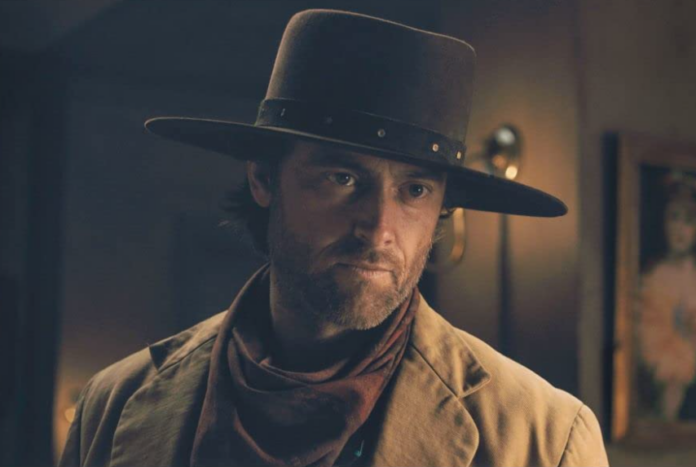 Apache Junction is an outpost of lawlessness, a haven for thieves and cold-blooded killers. The film is written and directed by Justin Lee (Badland, Swell, Big Legend). Despite the brutality and loose women, Apache Junction is the safest place to be. Outside those town lines is a guaranteed death. Big-city reporter Annabelle Angel (Scout Taylor-Compton, Halloween I & II, The Runaways) arrives to write an article on the town. She is a woman of fresh beauty and vulnerability that will easily be a target to the roughneck men in town looking for trouble. When trouble finds her, the notorious gunslinger, Jericho Ford (Stuart Townsend, Salem, Betrayal, Queen of the Damned) comes to her aid. Now Annabelle must entrust her future to a man with a deadly past. It’s not long before Jericho heads toward a tense showdown in this simple Western that unloads a short blast of action.

Country music star Trace Adkins (Moms’ Night Out, The Lincoln Lawyer) is back at acting with his newest role as Captain Hensley. The Captain is in charge of the army men who’s sent in to maintain control of the lawlessness happening in town. Oslo Pike (Ed Morrone, Final Kill) is a creepy, gambling gunslinger who happens to have one hell of a quick draw. Both men want to take out Jericho Ford (Townsend). Ford is a good man with an unfortunate reputation who makes money fighting and is often seen in the company of “lady of the night” worker, Christine Williams (Victoria Pratt, Heartland). Jericho has two friends/allies that help him when he needs it. Al Longfellow (Thomas Jane, The Expanse, Deep Blue Sea, and Boogie Nights) is the bar owner and rule setter of this wild town and Wasco (Ricky Lee, The Ridiculous 6, The Magnificent Seven). Together, they try to outsmart and shoot the Captain (Adkins) and Pike (Morrone) before chaos takes complete control.

If you’re someone like me who loves a good western, Apache Junction is not it. Every scene is staged and just about every character is emotionless and does not adequately belong. There is too much make-up on the women and the overall wardrobe is too clean and polished. The story is simple, unexciting, and the dialogue is basic and extremely white-washed. Christine’s (Pratt) speech on how “she’s a whore and doesn’t deserve love” as she’s wearing a cute outfit, make-up, and her hair gorgeously done is a serious eye roll. The whole film comes across as a made-for-TV Hallmark style/quality and is a major let down. A forgettable stage play-esque reenactment that presents a ‘too good to be true scenario’ for what’s supposed to be a raw, gritty, and lawless type of western. Could have had the potential to be fairly decent but it instantly flat-lined. It’s a definite no from me.

Apache Junction will be in theaters, On Demand and Digital on September 24th.