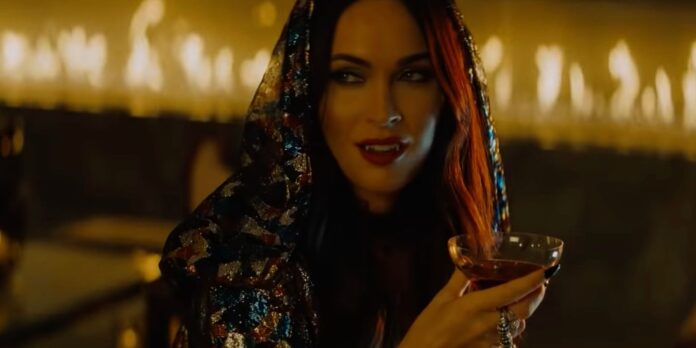 Vampires are killing it this year, literally. It seems like every network/streamer/film industry is dabbling into the vampiric world and giving their take via horror, comedy, and action that’s geared toward all ages. Netflix and director Adam Randall join the vampire bandwagon and present an action packed flick with hot women who nonchalantly prey on their victims throughout the night with reckless carnage. Ramping up the spooky season, Night Teeth is a fun take on a vampire adventure that stars Disney alum, Debby Ryan and Vampire Academy‘s Lucy Fry.

Benny (Jorge Lendeborg Jr.) is a young and handsome driver who offers to drive two young and beautiful women around as they party hop for the evening. It’s not long before his world is rocked by unimaginable horrors as the ladies drag him into a places filled with ghoulish creatures. Realizing he’s chauffeuring bloodthirsty patrons,  Benny embarks on a mission to save his city, all while trying not to be next on the menu. Ryan and Fry take lead as sexy murderous vamps and are joined by a glam squad of Megan Fox (Jennifer’s Body), Sydney Sweeney (The White Lotus), Alfie Allen (Games Of Thrones, Jojo Rabbit), Alexander Ludwig (Vikings), and Raúl Castillo (Ghost Tape). Benny is entangled with the powerful clan and is soon dragged into a territorial war against another rival gang of vampires. The night is young and the vampire clans are ready to rumble.