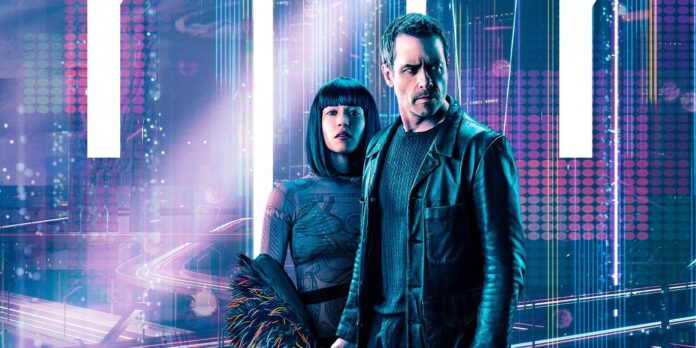 A Blade Runner knockoff that’s less ambitious and curiously lacking in suspense, Zone 414 is a waste of a talented cast that includes Guy Pearce, Matilda Lutz, and Travis Fimmel. Set in the not-too-distant future where lifelike androids are a regular part of life, and humans take liberties with them in very Westworld-esque fashion, the film is essentially a detective story, led by Pearce as troubled P.I. David Carmichael. We first meet him as he brutally guns down a woman who claims visions of the future. Moments after he puts a bullet right between her eyes, we learn she’s an android. David, however, didn’t know that when he did it. This cold, maliciousness is teased but never followed up on, a recurring theme for a film that is constantly spinning its wheels.

David agrees to take a dangerous gig for creepy android inventor and billionaire Marlon Veidt (an unrecognizable Travis Fimmel, originally cast in the lead role) to head into Zone 414 aka the “City of Robots”, to find his wayward daughter. In the Zone, androids and humans are free to interact socially, which means rich men routinely go there to act out their sexual desires. One android that happens to be Marlon’s favorite creator, Jane (Lutz), is growing more despondent over her lot in life. It’s clear she wants more, just as it’s also clear she won’t get it from psychopathic boss Royale (Olwen Fouéré) who doesn’t even intercede when an unseen stalker starts issuing violent threats towards Jane.

The plot sets itself as a classic film noir with sci-fi elements, and there could have been an effective examination of man’s inhumanity as opposed to androids whose only desire is to be human. But to say the script by Bryan Edward Hill is uneventful would be an understatement. Once David and Jane connect and set out to find Marlon’s daughter, all of the air is sucked out of the story. They venture to a few shady places and meet equally dubious people but nothing of substance occurs. There’s little action, and even less room for Pearce to be the charismatic force we know he can be. He’s actually pretty well-suited to this kind of conflicted gumshoe role but the script doesn’t allow for it. The same goes for Lutz, who was such a presence in the violent rape/vengeance thriller Revenge. Jane’s desire to be more than just a robot isn’t fleshed out (no pun intended) in any way we haven’t seen before, and Lutz struggles to bring the role to life. Music video director Andrew Baird gives the film as much gloss as he can with a few shades of neon here and there, but nothing stands out other than how dreary it is.

Zone 414 opens in theaters and digital on September 3rd.