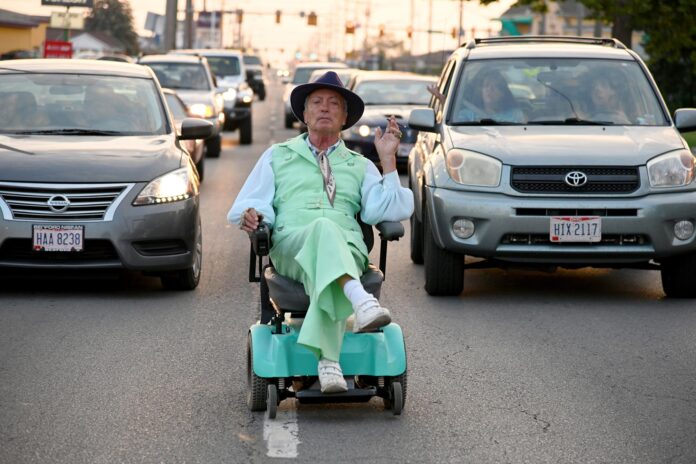 If you look on IMDb, the great character actor Udo Kier has appeared in over 250 film and television projects. None of them have showcased him quite like the appropriately titled Swan Song.

76-year-old Kier plays Pat “Miss Pat” Pitsenberger an aging gay hairdresser, now confined to a nursing home. He knows the end is near, as his past life living as an openly gay man in rural Ohio, comes creeping into his daydreams. A local lawyer representing one of Pat’s former clients visits him at the nursing home, basically demanding that he do her hair for her funeral despite the falling out they had years before.

From there, Pat spends the day wandering around his once beloved town of Sandusky Ohio, trying to acquire beauty supplies and debating whether or not to go through with what may be his last hair appointment. Throughout his journey he meets various figures from his past including the rival beautician Dee Dee Dale (a subtle and brilliant Jennifer Coolidge.) He visits graves and gay bars, realizing his glory days were more trauma filled than expected.

Not to be cliché but this was the role Kier was meant to play. After being supporting player in films like Blade, Susperia (1971), Ace Venture: Pet Detective, and Europa, the veteran actor finally gets the spotlight all to himself.. The first 10 minutes or so he doesn’t say much, but he makes that time as engaging as when he is spouting entire monologues.He easily switches from entertaining to devastating at the drop of a hat. His chemistry with Collidge is electric and can vogue and lipsync as well as the younger cast. He gives the performance of his life as Miss Pat and its a shame audiences have had to wait this long.

Swan Song is written and directed by Sandusky native Todd Stephens, best known for Edge of Seventeen (not the one with Hailee Steinfeld) and Not Another Gay Movie. Kier’s character is based on a real person who lived in Sandusky and was the first openly gay person Stephens saw in his conservative town. Because of this, sentimentality oozes from the script. It’s never precious but layers of nuance are inserted into the story from dialogue alone. Stephens ends up telling a vital story that many middled aged and older gay people affected by the AIDS epidemic have never seen before. A moving and quietly triumphant tale, Swan Song proves Stephens has evolved as filmmaker.

The soundtrack is also worth noting with songs by Judy Garland, Rupaul, Shirley Bassey, and Robyn. While the beginning is slightly slow, the music immediately brings the film together and feels like and extension of Kier’s character.

Overall, Swan Song is the work of quiet genius, both from Stephens and Keir. It feels like the latter got his own superhero film in a way, complete with an end credits scene and with more glitter.

Swan Song is in theaters now and On Demand August 13th, 2021. Watch the trailer below: