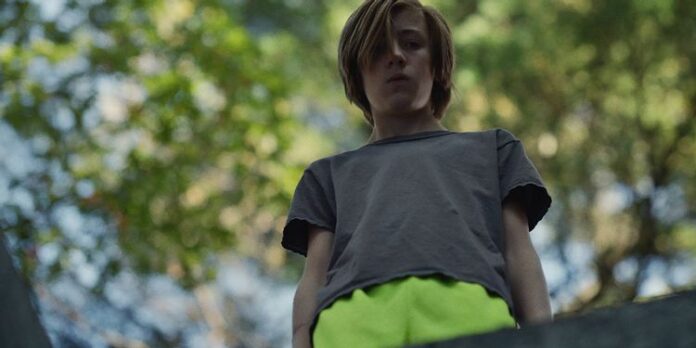 I remember John and the Hole having a lot of buzz at Sundance earlier this year, and now I can see why. It’s totally a festival movie; vaguely shocking, deliberate, a solid cast of appreciated supporting actors, and teasing the idea of larger themes. But outside of that bubble, director Pascual Sisto’s monotonous coming-of-age drama offers little beyond its initial premise which, while indeed startling at first, quickly wears out its welcome.

John (Charlie Shotwell) is just an ordinary, quiet 13-year-old kid. He wants to gain the attention of his parents (Michael C. Hall and Jennifer Ehle), but is always overshadowed by his older sister (Taissa Farmiga). At the dinner table when he tells them about a hole he found outside, an unfinished bunker the family had started, they pretty much ignore him. They’ll come to regret that. One day John poisons them all, and lowers them into the bunker where it’s too deep to escape. Once the family wakes up and realizes what has happened, their pleas for John to let them out fall on deaf ears.

So what does John do with all of this newfound freedom? Spends a lot of money, on food (only a little bit he shares with his captives) and other forms of entertainment. He lies to his mom’s friend about her whereabouts, invites friends over to hang out and cause trouble, basically what any kid would do if left to their own devices. What emerges is a glimpse at a lonely boy who goes to extreme lengths to see what it’s like to be an adult, only to find that it’s pretty damn boring. Well, so is John and the Hole.

Shot at a glacial pace, Sisto’s film tests your patience to the point where you feel trapped in the hole right along with John’s family. If there were valuable insights that couldn’t be gained from your run-of-the-mill high school comedy, that would be one thing. Furthermore, Sisto seems to recognize what a generic slog he’s made of this intriguing plot, and adds a weird framing device that reveals John’s story to be akin to a fable, passed down to…what, scare kids into not throwing their parents down a hole?

John and the Hole grabs you with a great idea, but it becomes very clear early on that it’s all this movie has to offer.

‘Dexter’ Fans Rejoice! Showtime Is Bringing Back The Serial Killer For A Limited Series

’50 States Of Fright’ Trailer: Sam Raimi Returns To Quibi With More Horror From Across The Map