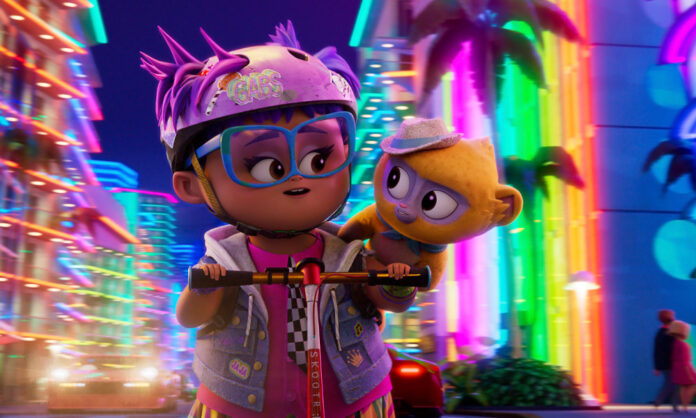 VIVO is a Netflix and Sony Pictures Animation movie musical adventure featuring all-new songs from Lin-Manuel Miranda. The Tony, Grammy, and Pulitzer Prize-winning creator of Hamilton and In the Heights who has more projects and songs on the way. The songs are a new age fusion of Broadway and Latin culture mix that is fun for all ages. They will entice you to get up and dance. This film is a heartfelt story about finding lost love so, make sure to keep tissues close by.

Miranda voices a one of a kind kinkajou (aka, a rainforest “honey bear”) named Vivo. He was raised in Cuba by a well known and respected street musician, Andrés (Juan de Marcos). Vivo and  Andrés spend their days blissfully playing music to crowds at the local square . Different yet inseparable, Vivo and Andrés are bonded over their love of music.

Andrés receives an invite to perform with musical star Marta Sandoval (Gloria Estefan), who is planning a farewell concert in Miami, Florida. He reveals to Vivo his long and unpursued love for Marta (Estefan) and shows him the song he wrote for her so many years before. Andrés wants them to go but Vivo wants to stay in Cuba.

An unforeseen tragedy leaves Vivo wanting to fulfill Andrés mission to Miami. It’s up to him to deliver the love song Andrés never could. Vivo teams up with and befriends purple haired and proud outcast Gabi (Ynairaly Simo), who has recently lost her father. She is a wild child but has a giant heart. Gabi (Simo) is an energetic tween who bounces to the beat of her own drum and keeps her mother, Rosa (Zoe Saldaña) on her toes. She has the best song in the whole film.

Vivo and Gabi are not alone in their adventure to Miami. They come across a trio of well-intentioned but super intense girl scout troop (voiced by Katie Lowes, Olivia Trujillo, and Lidya Jewett) who only want to rescue Vivo. Including a pair of socially awkward and love crossed spoonbills (Brian Tyree Henry, Nicole Byer), and a villainous Everglades python (Michael Rooker).

VIVO is an inspirational story about courage, finding family in unlikely friends, and the belief that music can open your soul to new worlds. A family fun film that deserves to be seen at least once. The storyline is a bit over the top but cute, nonetheless.

Vivo will be available on Netflix, August 6th.