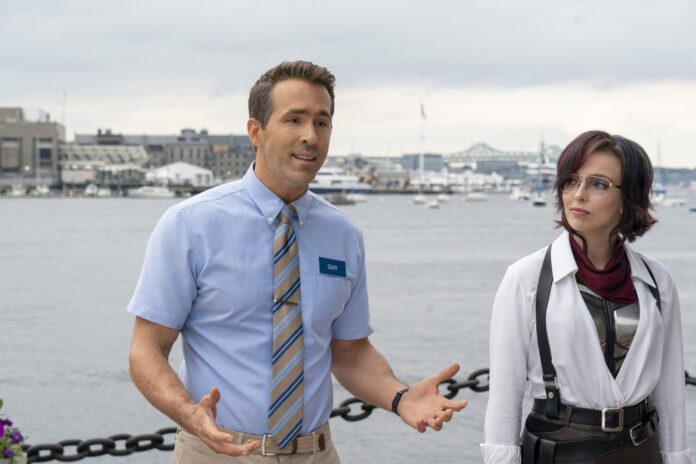 Is it too early to say Free Guy is the best video game movie EVER!?!?  Let’s be honest, the bar has been set incredibly low, and you’d be forgiven if your expectations were the same. But the film, a zany romp that’s part Stranger than Fiction, part They Live, and maybe a little bit of The Matrix, is insanely ambitious with levels of depth unseen for the genre. Not to mention it’s just plain fun, with director Shawn Levy and star Ryan Reynolds finding the joy and human connection that can come from video games.

What looked like Disney’s version of Ready Player One is a surprisingly deep story of living one’s life to the fullest rather than standing in the background. Reynolds’ character Guy, a happy-go-lucky dork who wears the same blue shirt and brown trousers every single day, has no idea he’s just an NPC (non-player character) in a Grand Theft Auto-esque game called Free City. This place is exactly what you’d find if you went online to play one of these open-world games, too. The civilians are made to be victims, usually of the uber-violent players and their deadly missions. Or because they just feel like beating up someone who can’t fight back. Let’s face it, gamers are a pretty toxic bunch and certain games bring it out more than others.

Gamers will immediately recognize all of the archetypes that populate Free City. The old lady who lost her cat, the businessman mumbling about reports due, the security guard (Buddy, played by Lil Rel Howery) in the bank that gets robbed every day. Guy is a teller in that bank, and to him this place is just home. But then he develops a crush on one Moloto Girl aka Millie (Jodie Comer), a player who gives off some serious Lara Croft vibes. In the real world, Millie is blasting her way through the game to prove that its code is based on a simulation game she made with her old friend Keys (Joe Keery), and stolen by prick CEO Antwan (Taika Waititi) to build Free City. After stealing a set of sunglasses and peering through them, Guy learns the truth about the world he lives in, and decided he’ll no longer be a background character, but an active participant. He’ll no longer be just a good Guy, but a GREAT guy!

Guy’s Truman Show-esque existential crisis isn’t something you have to be a gamer to understand, but those who are will take something extra from it. They’ll geek out at the number of Twitch streamers who make cameos, along with plenty of other appearances to remind you that, oh yeah, Fox is part of Disney now! Plus, whether know an open-world game from an open-faced sandwich, you’ll understand Guy’s desire to break free from the confines he’s been placed in, to forge his own path. And that he does, in an adventure that is sweet, full of heart, and still full of crazy explosions, car wrecks, at least one gun-toting bunny who could be a Minecraft wizard.

Levy specializes in feel-good action comedies (think Night at the Museum) with lead characters you just can’t help but root for. Guy is just someone you want to see win the love of his life and share a scoop of bubblegum ice cream with her. He’s such a contrast to the other egotistical characters, many of them men, who use games as a way to hide how awful they truly are. Antwan demeans his staff and belittles the players who buy his game and keep him rich. Is this any different from some of the complaints we hear about real video game companies that take their customers for granted? It’s genuinely refreshing to have a hero who genuinely wants to do the right thing, and isn’t some conflicted antihero. In a lot of ways, Guy is the most real person in the game even though he’s just a series of zeros and ones. When the world starts to take note of this rogue A.I. doing good deeds in Free City, we want to cheer right along with them.

It’s also a perfect role for Reynolds, who gets to embrace the wacky logic of video game worlds as much as he did comic books in Deadpool. Only as Guy he doesn’t sport a blistering R-rated mouth, but instead a giant beating heart. Reynolds can just be incredibly charming and likable without having to surround him with F-bombs and murders. Just let him be funny! This is also a great film for Comer, who is such a chameleonic actress it’s hard to get a gauge on who she’ll play next. And Waititi is just having way too much fun as the ultra-toxic Antwan, who can barely be bothered to learn how his own game works.

Free Guy deals with some heavy stuff but with a light touch, always aiming to entertain first and teach at the same time. It doesn’t even mind poking fun at itself for rampant commercialization and franchise-building when we know damn well Disney will try to make multiple sequels out of this. That self-awareness makes Free Guy a true joy that you’ll want to play again and again.