Home TV Disney+ ‘Star Wars: The Bad Batch’ Is Coming Back For Another Season In...
Facebook
Twitter 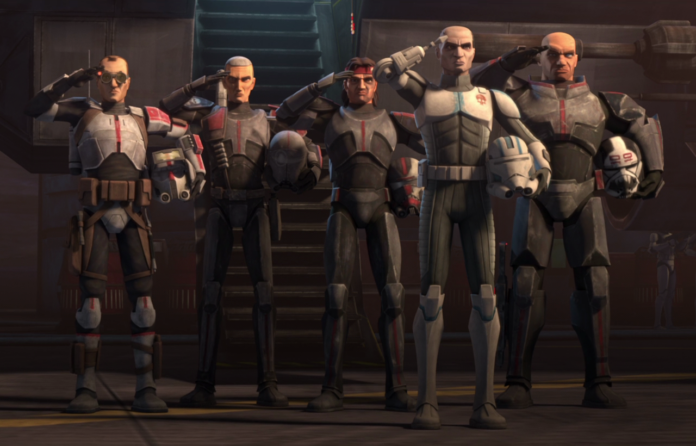 The first half of Star Wars: The Bad Batch‘s season finale hits Disney+ tonight, but fans won’t have to worry if this is the oddball team of clone troopers’ final mission. Disney has confirmed the animated series will return for a second season in 2022.

“Fans have enthusiastically embraced the action and drama of ‘Star Wars: The Bad Batch,’ and we are excited to see the Star Wars animated universe continue to expand on Disney+,” said Michael Paull, President of Disney+ and ESPN+. “As the dedicated streaming home for the Star Wars franchise, we can’t wait for the second season of this fan-favorite animated series.”

Of course, Star Wars guru and The Bad Batch exec-producer Dave Filoni also expressed his happiness at the show’s return…

“The entire Lucasfilm Animation team and I would like to thank Disney+ and our fans for the opportunity to continue telling the story of the Bad Batch.”

The Bad Batch is a spinoff of The Clone Wars, following troopers Hunter, Echo, Tech, Crosshair, and Wrecker, who are joined by the unique female clone Omega. This season has found the team refusing to follow Order 66 which tells them to kill all Jedi. They leave the Empire soon after and go on the run, enduring a betrayal from within.

After a slow start I’ve really gotten into The Bad Batch. My biggest problem was always that they didn’t feel like Star Wars characters, but like someone really wanted to do something with superheroes. Fortunately, each member has been developed surprisingly well, there are some cool tie-ins to prominent Star Wars events, and I don’t know how this season is going to end. Good stuff all around.

Star Wars: @TheBadBatch will return for a second season in 2022. Prepare for the two part finale of season one starting tomorrow, only on @DisneyPlus. #TheBadBatch pic.twitter.com/TOs5Lh34bT