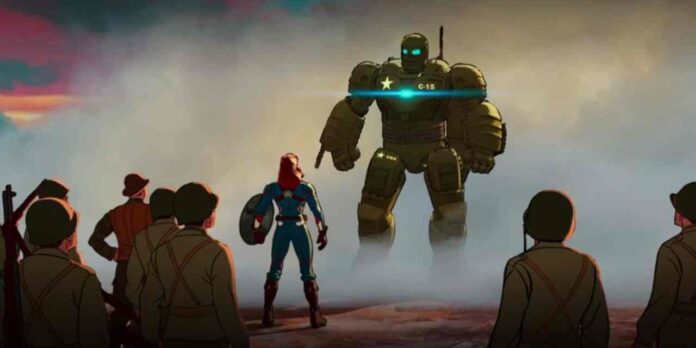 The cool thing about Marvel’s What If? series, just like the comic that preceded it, is the chance to see characters we love in a different light. They could be reimagined with a different backstory, different relationships, powers, and if different events had shaped them. For instance, what if it were Peggy Carter who got the Super Soldier serum and not Steve Rogers? We know that question will be answered and she will become the hero Captain Carter. But what happens to Rogers in that scenario?

In the latest What If? clip, we find out that Rogers still becomes a hero, still battles Nazis in WWII, and continues fighting alongside his pals Bucky Barnes and the Howling Commandos. The scene has Steve coming to Carter and the team’s rescue in a classic Iron Man-esque suit, known as the Hydra Stomper.

While that may sound like Chris Evans as Steve Rogers, the voice is actually Josh Keaton, joined by Marvel regulars Hayley Atwell, Sebastian Stan, and Dominic Cooper as Howard Stark.

What If? hits Disney+ on August 11th, and while each episode stands alone, the ramifications on the MCU will be felt.