Rumors of Atlantis have been flying since Okoye briefed the Black Widow about earthquakes off the coast of Wakanda in Avengers: Endgame. It’s inevitable that Marvel’s Lord of the Seas shows up at some point and based off of the casting rumors we’ve heard it seems more and more like that point is going to be Black Panther: Wakanda Forever.

A few weeks backs we posted the news that Tenoch Huerta had been cast in an unspecified villain role in the upcoming sequel, though the word on the street is that role is the VERY specific, it’s Namor the Sub-Mariner. Assuming it is Namor, he’s going to have his hands full with Wakanda, which is probably why he’s bringing some family with him.

Take this with a grain of salt, but Murphy’s Multiverse is reporting that Mabel Cadena, who’s worked solely in Spanish language film up to this point, has been cast as Namora, cousin to Namor. Apparently the two have been interacting on social media as of late, which certainly could be a sign that this rumor is correct, but there’s alot of variable’s there. Now, assuming this casting news is accurate, I can certainly see why she was cast. There’s most definitely a familial resemblance between the two. 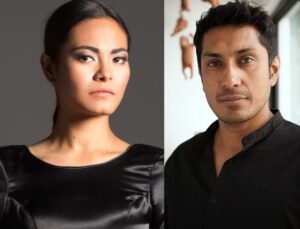 So this leads to the question of what role will the Atlanteans play in Black Panther: Wakanda Forever. The only thing we REALLY know is that they will have to address the catastrophic loss of Chadwick Boseman, and therefore T’Challa, as the role is not being recast. I’ve learned long ago not to question the logic of Kevin Feige but it seems like a rough place to intro a new major player. Namor, being an anti-hero who begrudginly helps the Avengers from time to time but maintains his disdain for the “surface dwellers, would work perfectly as a character who debuts a villain and eventually turns hero, ala Loki. The thing is, If Namor, Namora, and the rest of the Atlantean army try and take Wakanda while they are weak from the loss of T’challa…well, that’s going to be a tough one to come back from given the impact Boseman’s performance had on so many.