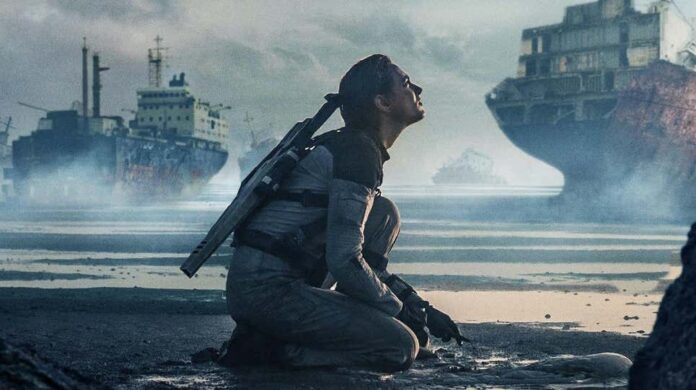 Director Tim Fehlbaum’s The Colony looks like a cross between Children of Men and The 100, with maybe a little bit of Planet of the Apes mixed in? That’s enough to hook a sci-fi nut like myself, along with the presence of Army of the Dead standout Nora Arnezeder and Game of Thrones‘ Iain Glen. Another name that simply can’t be ignored is exec-producer and destroyer of worlds Roland Emmerich, although his fingerprints can’t be found in this impressive trailer.

Because there’s no such thing as a future that works out beautifully in this genre, The Colony takes place after humanity has been forced to flee Earth because of climate-related disasters, leaving much of the planet submerged underwater. Generations later, those who escaped are unable to procreate on the new world, and so a team is sent back to Earth to test the living conditions. The lone astronaut who survived the mission discovers a colony that contains children, making Earth an ideal place to live again. However, in order to do so they’ll have to destroy the others, referred to as “mutts”, who have been struggling to survive there all of this time.

I’m digging the look of this, and am curious what kind of budget Fehlbaum was working with. It looks like a modest-size studio effort, with grand visual setpieces and a fair amount of action. Here’s hoping they don’t spoil too much with more trailers. This one is more than enough.

The Colony opens in theaters and digital on August 27th.

Cataclysmic conditions on Earth forced a mass exodus to a distant planet. Generations later, a manned mission hurtles back to assess living conditions on the desolate, mostly submerged world. The sole survivor of the expedition is attacked by a violent band of scavengers, themselves locked in battle with a far more sinister foe. Now, mankind’s very survival depends on the bravery and ingenuity of the lone astronaut.