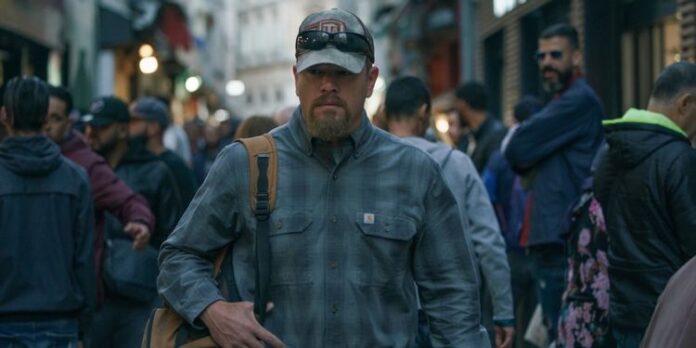 The MAGA Dude Takes Marseilles!!! Or as it is actually known, Stillwater, is a mixed bag of many different genres, only some of which are effective. Partially inspired by the Amanda Knox case, the film finds Damon as Bill Baker, a roughneck, white-collar American guy, with the tats and goatee to prove it, who travels to France to be near his daughter Allison (Abigail Breslin), imprisoned five years prior for the murder of her French-Arab girlfriend. The case was a global scandal. Bill is clearly not a guy given to public attention. He’s an oil rigger and construction guy, who like many is facing economic struggle. He does not fit in the very liberal country where his daughter is being held.

Stillwater never misses a beat in reminding us of this. Bill is such an American stereotype that the French people he meets will make jokes at his expense, ask him how many guns he owns (Two! How scandalous!) and if he voted for Trump. Bill is a joke, but director Tom McCarthy and a trio of screenwriters never make him a hateful man. Rather, he’s actually someone we come to feel a certain amount of empathy for because of his unflinching desire to protect his daughter.

When we meet Bill he’s settled into a familiar routine. Despite limited resources, he travels to Marseilles, books a room at the cheapie Best Western, and makes his way through the prison system so he can spend a few minutes with Allison, maybe do some of her laundry. This time, she requested: take a letter to her attorney to reopen the case because of new evidence suggesting a local named Akim was the true killer. When the lawyer refuses, Bill decides he wants to play detective, find this Akim guy, and get Allison set free.

Stillwater totally would’ve been a Liam Neeson-esque thriller about a dad with a particular set of skills in different hands. But Bill’s talents don’t run that deep. He can fix things, could probably be a pretty good bruiser. Plus, he can’t navigate the country without drawing attention to himself. Fortunately, he quickly befriends a young girl, Maya (Lilou Siauvaud) and her altruistic mother Virginie (Camille Cottin), who become his support and lifeline. Virginia and Bill couldn’t be more different; she’s very progressive and a theater actress. Bill has never seen a play in his life. But he cares for Maya, perhaps in a bid to be a better father than he was to Allison (it’s suggested he was pretty awful). Soon, they form their own little makeshift family and Bill finds his corner of happiness in this unfamiliar place.

This idea of building family wherever one can find it is a recurring theme from McCarthy, seen in previous films The Visitor, The Station Agent, and Win Win. Those films didn’t have the whole “hunting a possible murder suspect” angle to them, however, and the styles clash doesn’t quite work. Stillwater is most affecting when exploring Bill and his unexpected family unit, while tangling with the guilt he feels over his part in Allison’s situation. Furthermore, there’s doubt that begins to creep in whether she’s truly innocent, as she repeatedly asserts. The scenes Bill shares with Virginia and Maya smooth over some of his rough edges and make us forget about the politics we assume he has. Nothing Bill ever does is outwardly racist; it’s possible that’s because this story takes place five years into Allison’s incarceration, but the prejudice we see always comes from the supposed liberals making fun of the dumb American.

However, every time the plot stumbles back into Bill’s investigation and awkward attempts to reconcile with Allison, Stillwater comes to a screeching halt. As I’ve said before, McCarthy is such a seasoned hand at the heartwarming dysfunctional family drama that you can’t help but wonder what this film could have been without the thriller aspects. Damon is such a likable figure that you immediately feel empathy for Bill, but it’s not a role he’s naturally attuned with, either. Instead, it’s the luminous Camille Cottin who steals every scene as Virginia breaks through Bill’s hard exterior through sheer kindness. It doesn’t completely change Bill’s aggressively American tendencies, but she shows the understanding that he’s always been missing and certainly couldn’t express himself.

It’s unclear what Stillwater is ultimately about. It’s not really about Amanda Knox, it’s callously not at all about the Arab girl who died. There’s an attempt to remain as free of harsh political commentary as possible, when taking a stance would’ve served so much better. Instead, just as Stillwater never fully commits to a tone it never fully commits to a theme, either. Serious issues are glossed over, including an act of bodily injury that just comes and goes. Allusions to Europe’s class and race struggle, and how it mirrors America, are suggested but never followed through. When all is said and done, and a couple of head-snapping twists change our perception of everyone, it leaves you wondering whether the point is that there is no point, that the ideological divide is too vast to ever fully be mended.