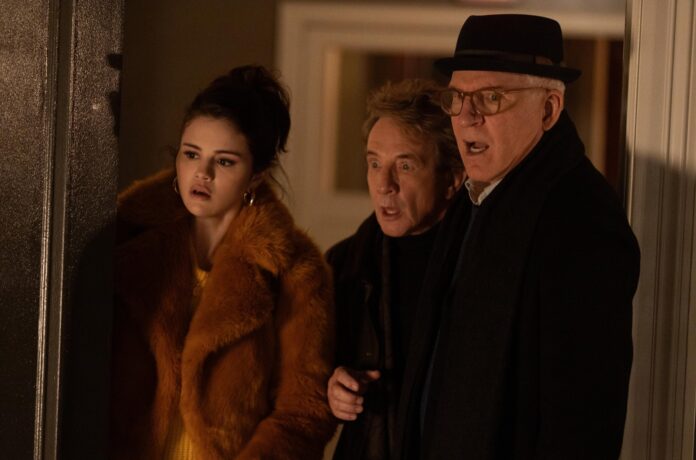 Everyone seems to have a podcast these days, including Selena Gomez, Steve Martin, and Martin Short. Well – sort of. These new three amigos are set to track and audibly record a murderer in the new Hulu series Only Murders in the Building.

The newest trailer gives us an even darker and more comedic look from the show than we’ve seen in previous teasers, focusing on the generational divide between Gomez’s and Short and Martin’s characters. I love it when Short plays a showbiz type and he doesn’t seem to disappoint here. In a previous article, I talked about my hope that Martin will channel his character Dead Men Don’t Wear Plaid, though from this trailer Martin’s character seems more subdued, despite taking selfies with all the suspects.

Also in the cast are Amy Ryan, Aaron Dominguez, Michael Cyril Creighton, with appearances by Nathan Lane and Jane Lynch. Even Sting makes an appearance in the trailer (thought Gomez’s character thinks he was in U2.) The series was created by Martin, John Hoffman, and Dan Fogelman.

From the minds of Steve Martin, Dan Fogelman, and John Hoffman comes a comedic murder-mystery series for the ages. “Only Murders In The Building” follows three strangers (Steve Martin, Martin Short, and Selena Gomez) who share an obsession with true crime and suddenly find themselves wrapped up in one. When a grisly death occurs inside their exclusive Upper West Side apartment building, the trio suspects murder and employs their precise knowledge of true crime to investigate the truth. As they record a podcast of their own to document the case, the three unravel the complex secrets of the building, which stretch back years. Perhaps even more explosive are the lies they tell one another. Soon, the endangered trio comes to realize a killer might be living amongst them as they race to decipher the mounting clues before it’s too late.

Only Murders in the Building streams on Hulu August 31st.

‘Worth’ Trailer: Michael Keaton Must Decide The Value Of Lives Lost On 9/11