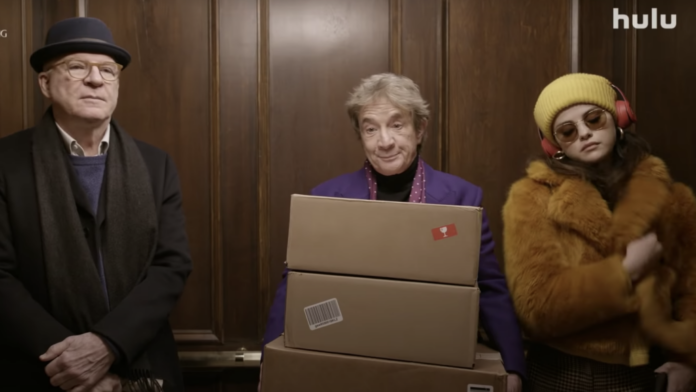 Two of The Three Amigos and a Wizard of Weaverly Place are coming together to solve a mystery in the new trailer for Hulu’s Only Murders In The Building. That’s right Steve Martin, Martin Short and Selena Gomez are about to solve a comedic Murder Mystery.

Not much is revealed in the official teaser except the three all live in the same building and have a lot of secrets. According to the show’s official website, Martin plays Charles a ’90 TV detective who has run out of acting jobs and turns to true crime for entertainment. Hopefully he will be channeling a bit of his character from Dead Men Don’t Wear Plaid. Short will play Oliver, a theater director looking for his next big production, this time in the form of a podcast. Gomez plays the most mysterious character in the bunch. Mabel is vague about her past and horrible at making friends but still wants to work with the older gentlemen to solve who killed their neighbor. I will personally watch anything with Martin Short is in, but the true crime element seems even more intriguing.

Steve Martin, Martin Short ad Selena Gomez star as three strangers who share an obsession with true crime and suddenly find themselves wrapped up in one. When a grisly death occurs inside their exclusive Upper West Side apartment building, the trio suspects murder and employs their precise knowledge of true crime to investigate the truth. As they record a podcasts of their own to document the case, the three unravel the couple secrets of the building which stretch back years. Perhaps even more explosive are the lies they tell one another. Soon, the endangered trio comes to realize a killer might be living amongst them as they race to decipher the mounting clues before it’s too late.

Only Murders in the Building will premiere on Hulu August 31st.