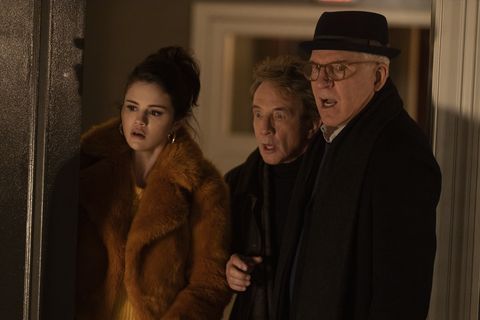 Steve Martin and Martin Short? Hey, those are two of the Three Amigos! They’ve been doing this comedy thing for longer than their Only Murders in the Building co-star Selena Gomez has been alive. But it’s her inclusion in Hulu’s mystery series that makes it intriguing because none of us knows how she’ll do opposite two comedy legends.

Martin, Short, and Gomez play three true-crime enthusiasts who find themselves part of the mystery when a murder is committed in their Upper West Side apartment building. Also in the cast are Amy Ryan, Aaron Dominguez, with appearances by Nathan Lane. The series was created by Martin and Alice in Wonderland actor John Hoffman, and Dan Fogelman.

I get strong Manhattan Murder Mystery vibes from this trailer, with the neuroticism of Woody Allen all over it. Martin has always been on the edge of that, anyway, so this is terrain that should be perfect for him. Also, it’s just damn good to see him and short together again after so many years.

Only Murders in the Building hits Hulu on August 31st.

From the minds of Steve Martin, Dan Fogelman, and John Hoffman comes a comedic murder-mystery series for the ages. “Only Murders In The Building” follows three strangers (Steve Martin, Martin Short, and Selena Gomez) who share an obsession with true crime and suddenly find themselves wrapped up in one. When a grisly death occurs inside their exclusive Upper West Side apartment building, the trio suspects murder and employs their precise knowledge of true crime to investigate the truth. As they record a podcast of their own to document the case, the three unravel the complex secrets of the building, which stretch back years. Perhaps even more explosive are the lies they tell one another. Soon, the endangered trio comes to realize a killer might be living amongst them as they race to decipher the mounting clues before it’s too late.