We all know Charles Lee Ray, aka Chucky, is one of the most iconic slashers of the 80’s. What he’s missing in stature he makes up for in body count and one-liners, rivaled only by Freddy Kruger in the latter. Syfy and USA hosted a panel for their upcoming show The Legacy of Chucky during this years Comic-Con@Home showcasing the 8-part series and giving a deep look into not just the show itself, but also the seeds from which it was grown. The 15min clip takes clips from the panel and behind the scenes commentary to shape our outlook for the show, ended by a full length trailer for the horror series which is set to debut on Halloween. 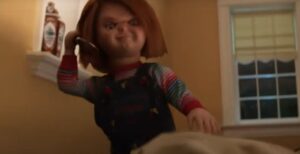 The biggest bit of awesome I took from the panel was that, unlike the recent film remake, they’re keeping the supernatural aspect of it all. Moreover, it’s a continuation of Child’s Play 2, following Andy and his step/foster sister Kyle as they navigate a new swath of terror cut by the world’s worst Christmas present. This means nostalgia galore. No redesign of the face (though, I didn’t mind the remakes changes), no techno-horror slant, just good old fashioned voodoo-enabled murder rampages. Oh, almost forgot the most important part…Brad Dourif, the original voice of Chucky, is back to voice the doll as well. 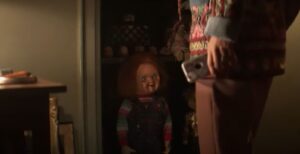 The footage we get splattered through out the behind the scenes stuff, coupled with the trailer at the tail end of the video have got me hyped. Yes, for the nostalgia stuff, but also because this was not hastily put together. It’s a group of people that get what made Child’s Play the source of every kid’s nightmares that was born between ’75 and ’85. The dichotomy between Chucky being friendly and, basically, grooming a kid during a video game session, and Chucky in full on murderistic glee is what made this series terrifying and it’s on full display here. Past that, the show appears to be shot incredibly well, making full use of angling to highlight Chucky’s size while still maintaining the primal fear we seem to have of dolls in general. The featured image in this article is my exhibit A.

While I tend to withhold excitement for these nostalgia based projects, I have to admit that I’m fully onboard when it comes to The Legacy of Chucky at this point.

The Legacy of Chucky premieres October 12 on SyFy/USA