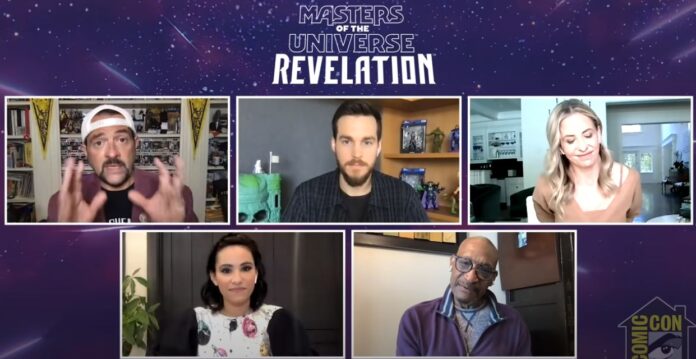 Say what you will about Kevin Smith and his recent work, the guy is just a pit of joy and love these days. That about sums up the feeling of the panel for Masters of the Universe: Revelation at this year’s San Diego Comic-Con, which is an @home Con for the second year in a row (fingers crossed for a live action Con later this year). Smith, the showrunner for Netflix’s newest dip into nostalgia, was joined on the Zoom panel by Chris Wood (as He-Man), Tiffany Smith (as Andra), Tony Todd (as Scare Glow), and Sarah Michelle Gellar (as Teela) where the group collectively gushed about the experience and what it meant to take on these iconic characters for another go.

I had to wait to write this (to the chagrin of many) until I had a chance to watch the first few episodes, just for some perspective. I get the love. I sat down last night with my 4-year old son and basked in the reflected joy he got watching the show. It’s truly something I want to thank these folks for. There’s nothing quite like seeing your kid loving something you loved when you were younger (and still love, to be honest). Screaming “I Have The POWER!” and gasping when Skeletor shows up. THIS is what remakes should be looking to recapture, not just the references and poster points, the feeling that it creates.

Watching the panel it’s no secret that pretty much everyone involved seemed to really take their roles in bringing this back with the seriousness it deserves. Chris Wood, who was awesome on Supergirl gushes about saying those words (By the power of Greyskull) for the first time, and even Sarah Michelle Gellar seemed genuinely overjoyed by the chance to be a hero for young girls in the form of Teela. Not to worry Luke Skywalker fans, Mark Hamill did drop in to talk a bit about how he approached one of the most well-known animated villains of all time, Skeletor.

The panel didn’t drop any news or unknown secrets, but they confirmed a second part to this first 5-part season was on it’s way. No date sadly, but from what I’ve seen already they have me on the hook. Smith is well known these days for his role as more of a cheerleader then a director on set (I mean that in a positive way), and the effects show. It’s almost like if people are happy and treated well, they do better work….crazy huh?

Check out the full panel below and look for Masters of the Universe: Revelation on Netflix, NOW!