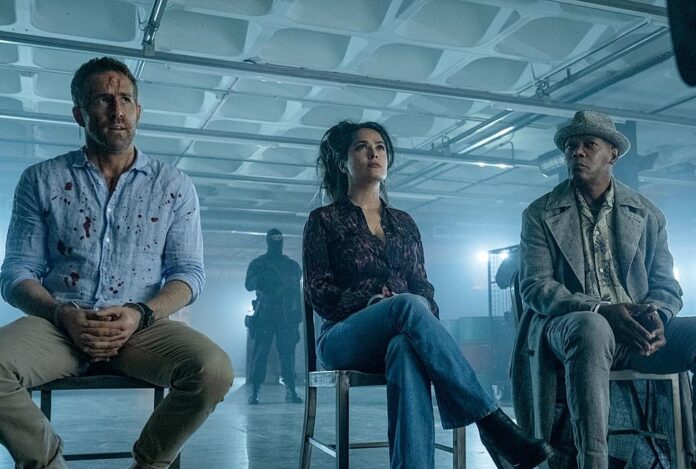 Let’s get the easy stuff out of the way first, shall we? If you liked 2017’s foul-mouthed, R-rated, guns blazin’ The Hitman’s Bodyguard, then you’re probably going to enjoy its bigger, mouthier sequel. The Hitman’s Wife’s Bodyguard is just as much of an excuse for another four-letter-word bonanza from Ryan Reynolds, Samuel L. Jackson, and Salma Hayek, with a little bit of Morgan Freeman thrown in for “Ha Ha, God said fuck!” hilarity. Is it disposable and stupid? Absolutely. Is it also incredibly enjoyable in the moment? You damn right it is.

I don’t like to get all high falootin’ when it comes to movies like The Hitman’s Wife’s Bodyguard. Some will knock it for being forgettable, and yeah, that much is true. For the life of me I can’t remember the plot of the first movie, and if you ask me for this one in a week I won’t remember it, either. But that’s not really the point. If you’re buying a ticket it’s to see Reynolds and Jackson slap one another around while dropping a metric ton of F-bombs. If there’s any surprise here at all, it’s that Hayek actually steals the show from both of them.

The story picks up with former AAA-rated bodyguard Michael Bryce (Reynolds), who can’t seem to get his groove back since Darius Kincaid (Jackson) murdered his last client. Encouraged by his beleaguered therapist to take a vacation in Capri, soak up some sun, and get away from guns for a while, Bryce instead has his relaxation ransacked by Darius’ wife, Sonia (Hayek). She comes in blasting both barrels at some goons on her tail, and there’s a hilarious slo-mo sight gag of Bryce missing all of this action happening around him. Sonia needs Bryce’s help to rescue a captured Darius.

An absolutely atrocious subplot involving Boston-born Interpol agent Bobby O’Neal (Frank Grillo) mucks things up further, as he recruits the reunited trio to help prevent a cyber attack by the megalomaniacal Aristotle Papadopolous (Antonio Banderas). What does he want? The Hell if I know! The script by Tom O’Connor barely exists, seeming to just lean on the actors to make it up as they go along. But that goes double for Aristotle, whose entire goal has SOMETHING to do with making Greece a superpower again by crashing world markets? Honestly, it doesn’t fucking matter.

The Hitman’s Wife’s Bodyguard is like the action equivalent of one of those Adam Sandler movies he makes with his buddies so they can hang out in cool places. Reynolds, Jackson, and Hayek cross all of Europe blowing things up, smashing cars, and saying “motherfucker” so much it might go out of style. In the case of Hayek, she brings the expected spiciness to the chaos, along with a heavy dose of bawdy sex appeal. She heaves her breasts and ass around like she was the Latinx version of Mae West, while only stopping for Sonia to shoot someone in the head or angst over her and Darius’ failed attempts at becoming parents. A running gag, that works pretty much the whole way through, is just how awful Sonia and Darius would be if they had kids. It’s the sort of silly subplot that is perfect for The Hitman’s Wife’s Bodyguard, but also allows Hayek to have a few brief moments of vulnerability. When Darius lets his guard down he talks about his one working testicle. That’s the kind of movie this is.

Directed once again by Patrick Hughes, his Expendables days continue to reap benefits. While his direction isn’t especially stylish, it’s effectively quick and brutal, making full use of the R-rating. He also knows how to work within any limitations of his cast, not that he needs to that often with three genre veterans making it all look easy.

The main trio are everything you expect them to be. Jackson says “fuck” a lot, Reynolds is self-deprecating to a comical fault, and Hayek is a firecracker. It’s disappointing that Grillo doesn’t have any action to himself, and the Desperado reunion between Banderas could’ve used some juice. For the most part, everyone is coasting along playing the characters we expect and want from them. And what more is there to expect from The Hitman’s Wife’s Bodyguard? It’s here to make you laugh at actors you love for 100-minutes and when it’s over, you can forget about it until The Hitman’s Ex-Wife’s Bodyguard or whatever the inevitable sequel will be. And you know what? That’s fine. The world needs movies like this, too. With people still anxious about returning to theaters, what better time is there for a film that delivers exactly what they paid for?

The Hitman’s Wife’s Bodyguard opens in theaters on June 16th.