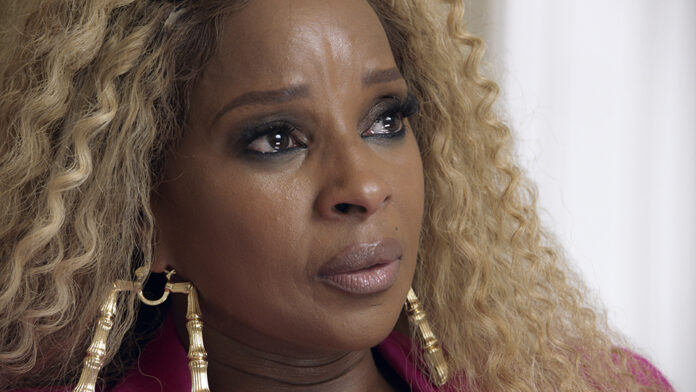 2021 is the year of the documentary centering on the female musician. We are barely halfway through and docs on Billie Eilish, Tina Turner, Demi Lovato, Pink, and Rita Moreno have already been released. Some of those films focus on legacy, others on youth and hunger, others on craft, others on personal triumph after hardship. Mary J.Blige’s My Life combines all of those elements to create a complete, and at times clumsy and overwhelming, portrait of the Queen of Hip-Hop Soul.

Produced by Blige and  Sean “P. Diddy” Combs,  the documentary follows Mary J. Blige’s early life, from her childhood in Yonkers, NY to her second album My Life, before jumping to the present. Method Man, Combs, Taraji P. Henson, Alicia Keys, and Tyler Perry, all pop up in talking-head interviews, along with friends, family, collaborators, and Blige herself. Quincy Jones serves as the executive music producer.

Diving deep into the record’s inspirations and impact, especially with black women, provides a sturdy jumping-off point for director Vanessa Roth (Oscar-winning producer for Freeheld). She uses beautiful picture-book animations to literally illustrate Blige’s personal hardships. However, Blige drives the narrative and Mary J. Blige’s My Life feels more like a filmed autobiography than a documentary about a musician.

You get a sense of not only who Blige was starting out, but the cast of characters she surrounded herself with and how they helped her on her journey. Roth perfectly captures how in tune Blige still is with the personal pain and trauma of her past, from growing up in the projects, surviving domestic violence to self-doubt. Watching a Grammy winner and Oscar nominee sit and be moved by their own music may seem like an ego trip. However, you can feel the pain Blige releases as she listens to her past self.

Conversely, we do witness a wall between the artist and the impact of their work come up. Blige comes off awkward in her filmed interactions with fans. If you are an artist who is so honest and raw in their work, then it’s natural for fans who relate to the darkest parts of you to communicate that. It’s also natural to feel uncomfortable when a series of complete strangers come up to you. Roth smartly uses a fan listening session to balance the meet and greet footage.

However, Vanessa Roth mostly struggles with Mary J. Blige’s My Life direction. It lacks a clear narrative structure and uses too many visual methods to tell the story. The aforementioned animation works great but combined with the talking heads, archival footage, fan listening sessions and impact statements, My Life’s 25th-anniversary concert – it’s all too much for one documentary. At the film’s beginning, Roth fumbles establishing a setting and a background. Performance clips appear out of chronological order, making those more unfamiliar with Blige’s work slightly confused or realize the impact of what is being shown.

Blige’s story, how emotive, grateful, and passionate she and the people around her shine through the documentary’s less than perfect construction. Granted, Blige had a large hand in making it, clearly controlling the narrative. However, what emerges is a compelling rag to riches story about an icon.

You can watch Mary J. Blige’s My Life on Amazon Prime. Watch the trailer below.