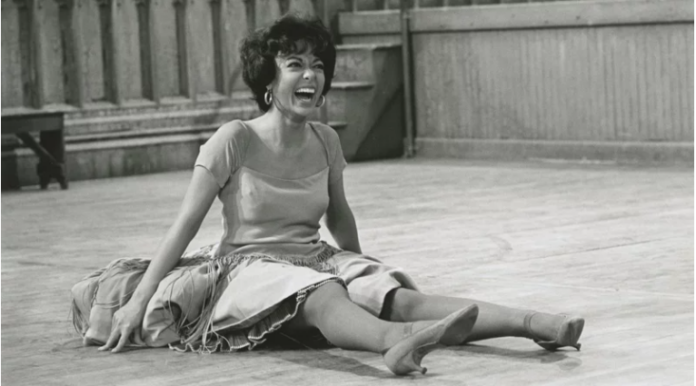 Rita Moreno: Just A Girl Who Decided To Go For It  is a documentary film highlighting aspects of Rita Moreno’s glamorous life as a leading heroine in Hollywood. She discusses the good, bad, and the ugly of when she was often overlooked, objectified, and sexualized in the early stages of her era. Her career of acting, singing, and dancing spans over 70+ years despite the ignorance and cruelty faced. Rita is still going strong as a pleasurable force to be reckoned with. Directed by Mariem Pérez Riera and an all-star cast of co-workers, friends and family, and people who Rita has inspired includes George Chakiris, Héctor Elizondo, Gloria Estefan, Tom Fontana, Morgan Freeman, Mitzi Gaynor, Whoopi Goldberg, Norman Lear, Eva Longoria, Justina Machado, Terrence McNally, Lin-Manuel Miranda, and Karen Olivo just to name a few.

Moreno recounts her childhood memories of having been born into poverty on a Puerto Rican farm. Spending most of her time outside, she hardly wore shoes at all. One of her favorite memories is of all the local mothers hand washing laundry at the closest river. They talked gossip while their children played in the water. For Rita, these were happy and humble times. Even cherishing memories of her younger brother from whom she would never see again. Her parents divorced when she was 5 years old. Rita and her mother decided to leave Puerto Rico to look for work. They took the long and uncomfortable journey on a beat up clunker of a ship, and immigrated to the states.

Rita Moreno and her seamstress mother finally settle in New York City. It is here she discovers her love for dance. Not only was it therapeutic for her but it solidified her goal of fulfilling a life of entertaining people. A chance encounter changed her life completely when the opportunity presented itself to star in Hollywood films. Donning her best “Elizabeth Taylor” look (for whom she idolized at the time) and instantly impresses the representative. Her door to Hollywood opens. Unfortunately, studios would only cast Moreno as any ethnic minority such as Polynesian, Native American, or Egyptian. Painting her skin tone to the role that needed filled. Her growing frustration of relentless encounters of sexism and racism took a toll on her physically, emotionally, and mentally.

Rita Moreno: Just A Girl Who Decided To Go For It illuminates the humor and grace of Moreno. She respectively bears all the struggles faced on her path to stardom. When she wasn’t a target of sexism and abuse, Rita would suffer long term bouts of depression. Most of her roller coaster turmoil stemmed from her on again, off again and toxic relationship with Marlon Brando. She suffered a botched abortion and after nearly 10 years of keeping their unhealthy relationship relatively discreet, it eventually lead to exploding onscreen. Feeling at her lowest point, Rita attempted to take her own life. The aftermath of this experience left her stronger and more determined to not take anymore bullshit from anyone else ever again. She is 100% a woman of her word!

Rita Moreno has become a celebrated and beloved, award winning actor of our time. Despite becoming the first Latina actress to win an Academy Award for her role as Anita in “West Side Story” (1961), the studios continued to offer Moreno lesser roles as stereotypical ethnic minorities, ignoring her proven talent. Her raw, natural flair and resilience triumphed over adversity. She broke barriers, fought for representation and forged the path for new generations of artists. Her power and tenacity further earned her the EGOT (Emmy, Grammy, Oscar, and Tony) Awards. Rita Moreno is a total badass!!

Rita Moreno: Just A Girl Who Decided To Go For It will play in theaters June 18th.